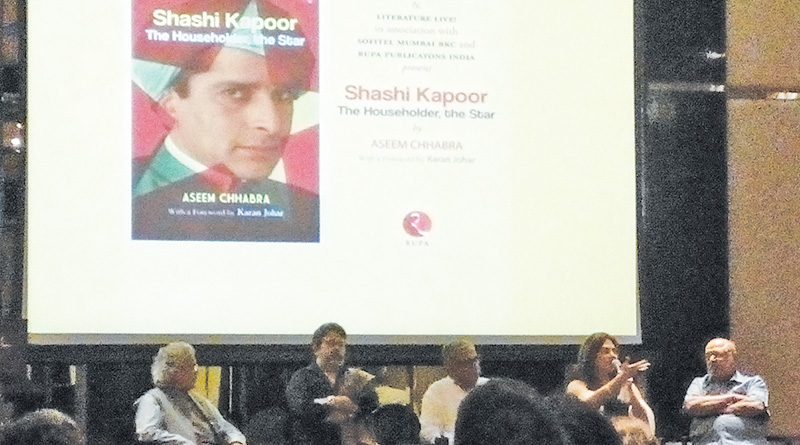 The select 150-odd who were present at The Sofitel Mumbai, BKC, on 11th June at the glittering launch of ‘Shashi Kapoor: The Householder, the Star’ by New York based film journalist and columnist, Aseem Chhabra, witnessed a fascinating panel discussion which comprised, besides the author, filmmaker Shyam Benagal; along with Dadasaheb Phalke award recipient, columnist and Founder/Director of Mumbai International Literary Festival, Anil Dharker; and actor Kunal Kapoor (son of Shashi Kapoor).

The discussion was moderated by columnist and editor Malavika Sangghvi who declared that Shashi Kapoor was the most handsome actor and one who stood for values worthy of emulation. Benegal, who has directed Shashi in critically acclaimed hits like ‘Junoon’ and ‘Kalyug’, averred that Shashi always valued professionalism and never imposed his views on the director. He could always expect total commitment from him — there were no half measures; and that had it not been for his failing health, Shashi would still be working.

Dharker, a close friend of Shashi’s, affirmed that he imbibed his values from his parents and that his love for food was the prime reason for his deteriorating health. Chhabra shared an interesting aside — Shashi and Amitabh acted together in 13 films and would always indulge in a friendly challenge as to who would arrive on sets first. Amitabh, though a stickler for punctuality, would take second spot! Chhabra, tongue-in-cheek, mentioned that his fan-base and admirers consisted of ‘both genders’.

Son Kunal revealed that the quality he admired most in his dad was his discipline. He brought the house down by admitting that due to his father’s dashing looks and the fact that there was a mere 21-year age difference between them, it was suicidal for the son to bring his girlfriend home!