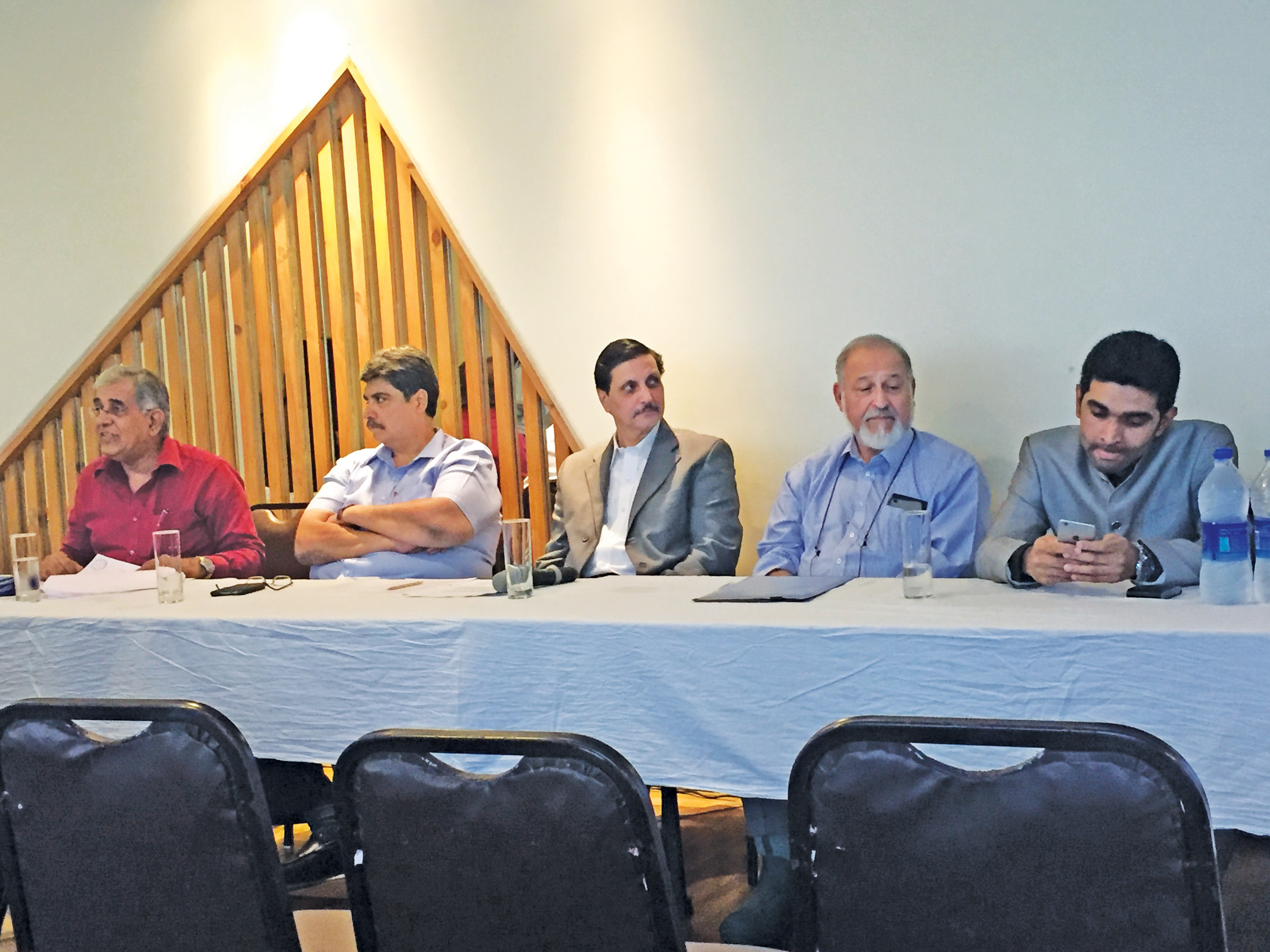 A select group of mainline daily journalists had been invited with the aim of “setting the record straight by correcting the falsehoods and twisted truths surrounding the Dadi House tenancy controversy”, said the BPP Chairman. But, even as Khojeste Mistree had just started addressing the group, Trustee Viraf Mehta forced his way into the event, uninvited. He refused to leave inspite of being repeatedly asked to do so. The meeting continued with Viraf staying put in the audience, as the briefing went on to unveil, a number of proofs in the form of affidavits, and audio as well as audio-visual evidences which all point towards the imminent arrest of BPP’s Ex-Chairman Dinshaw Mehta, if the police file a charge-sheet.

Parsi Times presents a comprehensive coverage of the entire Dadi House controversy and how the dynamism and commitment of the current Board of Trustees has finally resolved this tenancy issue.

The Background:
In 2013, the Trustees of the erstwhile BPP Board accused the then Chairman Dinshaw Mehta of a cash transaction in the transfer of tenancy of Dadi House. This accusation was denied by Mehta. The complaint and the subsequent FIR filed by MRA Marg Police Station is still open. However, new evidence, available with the current Trustees, establishes that the alleged cash transactions did take place. Affidavits filed with the Commissioner of Police allege that Dinshaw Mehta had asked for Rs. 25 lakh to be delivered in cash by the tenant at the house of his confidant.

On November 7, 2013 Dinshaw was missing from the office of the Wadia Committee of Management (where he was to tender his resignation) calling in sick with palpitations. Next day, he allegedly visited Musharraf, the proposed incoming tenant, at his residence and convinced him to come to his (Dinshaw’s) Foras Road office and collect Rs. 25 lakh in cash and issue cheques worth an equivalent amount in favour of BPP. Dinshaw allegedly asked Musharraf to hand over these cheques to Phiroze Patel, the then acting CEO. Phiroze Patel has confirmed in a letter that Dinshaw brought Musharraf to his cabin along with the cheques.

To enable Musharraf to re-organise his funds, the cheques were deposited by Phiroze Patel over a period of eleven days, after the dates on the cheque. Patel allegedly has tried to protect Dinshaw by making phony claims stating that he may have forgotten to deposit all the cheques immediately due to work pressure. Patel, who has been attacked in the past by the media for being on the receiving end of various favours from Dinshaw, may come under fire for his possible role in this transaction.

The Present:
In the WAPIZ page, the Chairman of the BPP, Mr Yazdi Desai has said, “My stand that Dinshaw Mehta personally siphoned off cash from the tenant has been vindicated. Dinshaw Mehta has been caught stealing cash from the BPP. The police should arrest Dinshaw Mehta and also his two sons Viraf and Hormuz for threatening witnesses and tampering with evidence.” The WAPIZ page has also published the entire affidavit of the proposed incoming tenant Musharraf.

Ex-Trustee Khojeste Mistree started the proceedings giving the background and admitting that he believed it was the hand of God which had brought this long pending issue to this stage where concrete proof was available to establish the truth. Even as the press briefing had commenced, Viraf Mehta gate-crashed. Despite being told that the meeting was by invitation only, he insisted on sitting and was allowed as an “uninvited guest”. One could only sympathise with Viraf because every passing minute made it increasingly embarrassing for him, as numerous evidences were presented by the Trustees. The facts of the case that were revealed as well as the exposé (which was part of a careful sting operation) of the role that his father Dinshaw, his brother Hormuz and he personally had played in the last few weeks, was definitely not something anyone in the audience, including Viraf, may have expected.

The Trustees distributed copies of five different affidavits. Whereas the Wapiz page published Musharaf’s first affidavit, the other affidavits established the facts in a doubtless manner. Because of Viraf’s uninvited and self-imposed presence in the meeting, Trustee Kersi Randeria started the proceedings from what he called a “bottom up” sequence.

Reading from a whatsapp message that Dinshaw had sent out titled ‘The Witch Hunt Continues’ just that morning, Randeria established that Dinshaw was alleging that the tenant Musharraf was threatened, cajoled and blackmailed by Yazdi and himself to tell lies to nail Dinshaw. The members of the press were then taken through various documents, brick by brick, constructing an indestructible wall of evidence. The chain of evidence proved that not just the incoming tenant but at least two other people were able to establish what is popularly called the money trail.

An additional affidavit by Musharraf was produced, which stated that when Musharraf was called to the BPP to settle his dues, Viraf Mehta, who apparently was waiting for him, took Musharraf into the Board Room and tried to force him to sign a letter which said that no cash was ever given. Musharraf refused, much to Viraf’s displeasure.

Viraf’s discomfort grew when Randeria asked him point blank whether he and his family had tried to blackmail the incoming tenant. On receiving no reply, a video clip was played showing a meeting being held in Starbucks café at Horniman Circle. The frozen smile on Viraf’s face told the remainder of the story. Randeria then informed the media that Viraf refused to sign the tenancy agreement on Tuesday the 12th of July, when all the other five Trustees did. Instead, on Viraf’s insistence, a special Board meeting was called on Wednesday the 13th, when Viraf said he would be signing the document. From Monday to Wednesday that week, both Viraf and his brother Hormuz sent a number of whatsapp messages to Musharraf asking him to meet one or both of them under the pretext that they wanted to “show” him something. The meeting did not take place and Viraf did not sign the tenancy agreement.

Next video recordings shot on Thursday the 14th of July were shown. Viraf Mehta, who had refused to come for a Board meeting on Thursday (claiming that he was very busy) met Musharraf at Starbucks. Also present for that meeting was a relative of Musharraf and Hormuz Mehta. Both, the video and audio recordings of that day were played for the press. In the audio recording, Viraf tells Musharraf that he is willing to sign the tenancy agreement but he wants a letter from Musharraf stating that cash was given to and received back from someone other than Dinshaw Mehta. Blame someone else and our father is exonerated and your credibility before the law is trashed. This will help all of us, the brothers told Musharraf. When Musharraf refused to co-operate, Viraf told him that he cannot sign the tenancy agreement because as soon as Musharraf’s tenancy is through the affidavit of Musharraf will be made available to Yazdi Desai and his father’s (Dinshaw Mehta) role would be exposed. At this point the Mehta clan had become aware of the possible existence of an affidavit/letter that would reveal all the facts. Viraf and Hormaz said… give us a letter! Blame someone else! And your tenancy will be through.

This extremely damaging audio and video evidence left all stunned even as Viraf Mehta sat on, probably regretting his stubborn insistence on staying. Even though the audio was not very clear – the facts were. The Mehtas, it was proved, were the ones blackmailing Musharraf and not Yazdi Desai and Kersi Randeria!

Another audio recording Dinshaw and Viraf’s visit to Musharraf’s house was now played for the media. A one hour fifteen minute long audio was played in bits and parts. Time and again, Viraf and Dinshaw Mehta were heard trying to dissuade Musharraf from speaking the truth about the giving and receiving Rs.25 lakhs in cash. At one point, Viraf was also heard telling his father Dinshaw not to be too macho and think of the repercussions, saying, “Remember there is a family working with you!”  All the audios which were played are subject to voice verification as well as whatever other tests the police may want to do. Yet what one heard is probably the result of an extremely detailed investigation conducted by the Trustees.

But the final blow was the biggest of them all, when Musharraf himself walked in for the press briefing. He spoke in first witness and his words, “Dinshaw Mehta asked for cash” pretty much sealed it all. The Chairman Yazdi Desai spoke about their efforts and gave an account of how it was Musharraf who had approached him. He spoke about the three years of effort put into this case to see it to justice. “It’s been a difficult journey, what with even the Economic Offences Wing (EOW) carrying out a very sketchy investigation Let the truth be known. What has been most upsetting to me is the modus operandi in which the then Chairman was trying to get this agreement passed!”

Trustee Noshir Dadrawala was passionate when he spoke of the impropriety of cash transactions. “I’m just happy that our current Board has a strict policy to deal only in cheques. It simply boils down to two things – one – that there should have never been any cash transactions; and two – sending cash to someone else’s home is simply unacceptable. Bad!”

Dear community members, the proverbial dye has been cast. On the 2nd of August, the police will request the Court to allow further investigation of this complaint. The determined Trustees have left no stone unturned in this effort. They have met the Police Commissioner, the Additional Commissioner, South Region as well as the DCP of Zone I. They want this investigation to be concluded in an honest and fair manner. The offences of Criminal Breach of Trust and Cheating are serious offences and if a charge sheet is filed (as it may well be, looking at all the facts that were presented) then there is a strong possibility of an arrest.

Even so, whichever way the investigation proceeds, the biggest casualty will be the image of the Parsi community. Let there be justice and let this justice ensure that never should our community be put through this embarrassment again.