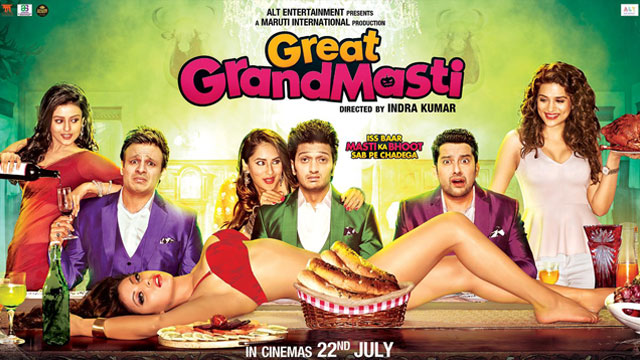 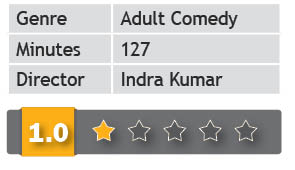 An interesting plot, impressive performances and original jokes are some of the ingredients for a commendable film. Sadly, ‘Grate’ Grand Masti has none of the above. The opening frames of the film, with Riteish Deshmukh and Farzin Pardiwalla, is a pointer to how the rest of the film would pan out and offers the viewers an excellent opportunity to walk out and spend the remaining 126 minutes more fruitfully.

Buddies Amar (Riteish), Meet (Vivek Oberoi) and Prem (Aftab Shivdasani) are three married guys who, for disparate reasons, are force to lead a life of celibacy, with Antakshri Baba (Sanjay Misra), the proverbial self-proclaimed Godman contributing to Amar’s plight. The Indian perception of an adult (read:sex) comedy is restricted to displaying and resorting to euphemisms for the human anatomy and GGM imperiously carries this legacy forward.

The three guys now get a chance to visit Doodhwadi town, and a ‘haunted haveli’ where Ragini (Urvashi Rautela) resides. She is a ‘virgin ghost’ — I reckon the filmmakers weren’t sure how to describe her, so for ‘ample measure’ (pun intended), they qualified the ghost. GGM is an inane film in which every tried (and tired) formula in the book is used. Sample this— after a bout of having a viagra-induced drink, Prem manages to play the piano— naturally without his hands; and Amar correcting Meet, ‘it’s cactus, not cocktus’. References to the Ramsay Brothers and Shiny ‘bai’ (alluding to the Shiney Ahuja case) are doled out.

One is unsure of how many cuts the Censors have effected, but the filmmakers, in making this ‘adult comedy’, have tried to show maximum ‘cuts and cleavages’ (guess the Indra Kumar psyche is getting to me too).

A couple of jokes are bearable, the music is passable, and Urvashi Rautela in her fifth feature outing does reasonably well, as does Shreyas Talpade in a special appearance.