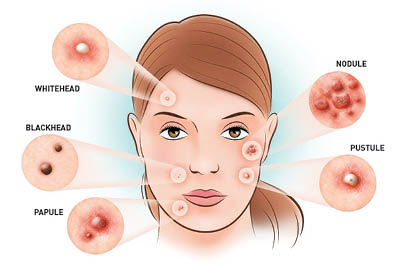 Acne, also known as pimples, occurs when oil and dead skin cells accumulate on hair follicles. They mostly appear on the face, neck, chest, back and shoulders. Various forms of pimples exist based on the severity of the condition. Acne affects virtually everyone at some point in their lives. It’s most frequent amongst teenagers, affecting approximately 85%!.
Acne is commonly perceived as a skin condition of adolescence, however, it’s incidence remains high into adulthood. It affects men and women in different ways and should be prevented or treated, and should not be allowed to run its course.

Causes of Acne: Acne is associated with a sudden surge in the production of oil or sebum which activates a generally harmless skin bacterium known as Propioni bacterium Acne that eventually becomes more aggressive and triggers inflammation and production of pus. The most common reasons include genetics, which plays an important role in the development of acne; alterations in hormone levels during periods and pregnancy in women; and an increased level of testosterone, a puberty hormone, causing excessive production of sebum. Certain cosmetics and medications like steroids and anti-epileptic drugs can cause acne spots. Foods like chocolates, fatty foods and excessive amounts of milk or sweets can aggravate acne. Being stressed may also aggravate acne. Smoking can trigger acne in older individuals.
Things that further worsen acne include pressure on the skin due to bike helmets, backpacks, or tight collars; pollution and high humidity; squeezing or picking at pimples; hard scrubbing of skin and dandruff.

Symptoms of Acne: Include oily skin and spots, and occasionally skin that is hot or painful to touch. The six main types of spots due to acne triggering different skin changes include Whiteheads (pimples under the skin – these do not empty when squeezed); Blackheads (small black or yellowish bumps rising to the skin’s surface, usually black in colour); Papules (Small red bumps which feel tender or sore); Pustules (red pimples similar to papules but filled with pus in the centre); Nodules (large and hard painful pimples, deep in the skin); and Cysts (most severe form of acne – deep, pus-filled pimples similar to boils, with risk of leaving permanent scars).

Complications of Acne: Acne scars can be a common complication of acne. Scarring occurs when acne is not treated. The three main types of acne scars include:
Ice-pick Scars: Small, deep holes on the surface of the skin that resemble skin punctures
Rolling Scars: Scar tissues produced under the skin that make the skin’s surface uneven.
Boxcar Scars: Round or oval depressions on the skin.

Managing Acne with Homeopathy: Homeopathy is highly efficient in treating acne. Homeopathic medicines help the patient in eliminating the eruptions, preventing outbreaks and giving a healthy look to the skin gradually. However, acne does not disappear instantly. Since the occurrence of acne is highly influenced by hormonal levels, the severity of acne eruptions differs during the treatment period. Fortunately, sustained and regular medication can help in controlling acne and finally treating it completely.