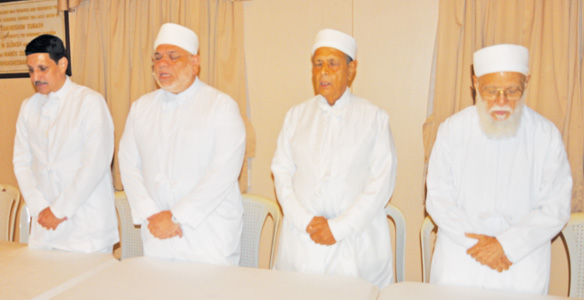 “Not, how did he die, but how did he live?
Not, what did he gain, but what did he give?
These are the units to measure the worth
Of a man as a man, regardless of birth.”

Descended from an illustrious lineage which can be traced back to the 16th century and which can justifiably pride itself in the support and dissemination of Zoroastrianism, the erudite Dasturji Mirza was an MSc and PhD in Organic Chemistry, besides being a lecturer at St. Xavier’s College. Befittingly, the rain gods played truant, enabling a large number of community members to congregate at the condolence meeting of our revered High Priest Dasturji Dr. Peshotan Mirza. The overcast conditions outside were in keeping with the sombre mood in the hall, as Er. Cyrus Darbary, Hon. Secretary of the Athornan Mandal which had organised the meet (and of which the late Dasturji was a Trustee) commenced the proceedings with three Ashem Vohus.

Vada Dastur Khurshed Dastoor, after invoking the blessings of Zarthost Paigambar, shared about his active association of 14 years with Vada Dastur Dr. Peshotan Mirza, especially after the latter was ordained as High Priest of Iranshah Atash Behram on 13th May, 2004.

His voice choked with emotion as he recounted the times while travelling together to Udvada, how they would engage in fruitful discussions on a wide variety of topics. He portrayed him as a magnanimous, soft-spoken, humble and noble human being, besides being a loving husband to Maharukh and a devoted father to Aban and Darayus. The age difference between the two was never a barrier, and he recollected with a tinge of bitterness the times when people and groups had taken advantage of his benevolence. He would take up cudgels against anybody who wrote against the nine families of Udvada who protected the Holy Fire. His death was an irreplaceable void, he concluded.

Chairman of the Athornan Mandal, Er. Nadir Modi analysed the late Dasturji’s name as defined by Harper Collins dictionary – Peshotan: a person with a probing action; Hormuzdiar: a king among scholars and a scholar among kings; Mirza: the son of a king. Er. Modi said with telling effect that Dasturji Mirza had led an exemplary life and had taken the utmost advantage of his science background to elucidate the tenets of our religion.

BPP Chairman Yazdi Desai who had known Dasturji since 2004, described him as a devoted family person, dignified and humble; yet strong in his convictions and one who could act decisively. He admitted that he would, if any clarification be required on a religious matter, seek Dr. Peshotan Mirza’s advice as his interpretations and simplicity of logic always floored him.

Er. Aspandiyar Dadachanji remarked that the revered late Dasturji had transitioned from the ephemeral to the eternal world. Dasturji would personally pray, with a clear diction, for his father Dasturji Hormazdiar Mirza’s Muktad prayers at the Vatcha-Gandhi Agiary. He equated the Dasturji’s demise in his 72nd year to the 72 Chapters of our Ijashni. Er. Dadachanji recounted Dasturji Hormuzdiar’s sense of humour while, when crossing the perilous intersection of Hughes Road across Vatcha-Gandhi Agiary, he jokingly commented that it would be easier to cross ‘Chinvat Bridge’ to the other world.

A relative of the late Dasturji, Trustee Er. Dr. Parvez Bajan described him as a shining jewel of the priestly class and remembered with fondness their 40-year-old association; and remarked that Dasturji had adorned the ‘gaadi’ of Iranshah with distinction, after having returned from Iran (where he lived for many years), following the revolution there. According to Dasturji Mirza, ours was not a dogmatic religion, but a philosophical one. Reiterating the late Dasturji’s scientific background, he said that whatever scientific doctrines were proved centuries ago, had already been ordained in our religion. Dr. Bajan brought to life a long forgotten prayer (a sermon on death) – Aafreen Aogemadich.

Er. Dr. Ramiyar Karanjia recalled that his first association with the family was that of a student of the late Dasturji’s father Hormuzdiar – from Std VIII till his MA. Though the father could be strict and stern, son Peshotan, who always had a beatific smile, was quite the opposite. Both father and son shared a common trait – of having a childlike, hearty laughter. The best tribute one could pay the late Dasturji would be to imbibe his stellar qualities of modesty and equanimity.

Teary-eyed daughter, Aban thanked one and all for the support extended to the family and described her father as her ‘best friend’, saying, “Dad was my world. I would tease him, irritate him and even argue with him.”

Lastly, Er. Cyrus Darbary read out a few of the many letters of tribute received by the Athornan Mandal… Vada Dasturji Kaikhushroo JamaspAsa said that one must always keep in mind the yeoman service rendered to Udvada Atash Behram. BPP Trustee Noshir Dadrawalla opined that the late Dasturji was an embodiment of high learning; and an icon of patience and contentment. Dasturji Dr. Firoze Kotwal recalled Dasturji Mirza’s orthodoxy, sincerity and diligence, and his distinguished lineage from the 16th century. Er. Dr. Soli Dastur wrote from Florida of how the late Dasturji had left an indelible mark on him.