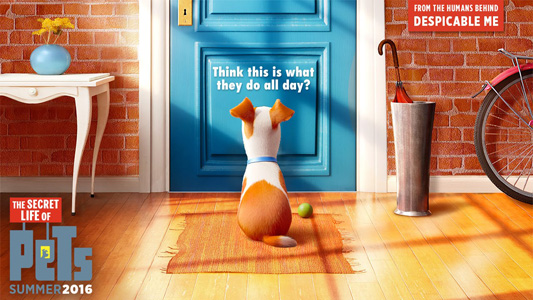 A delightful fusion of fur, feather and fin, ‘The Secret Life of Pets’ will certainly cause pet-owners to give
themselves a pat on the back and non pet-owners a chance to ponder ….. Why not (bring them home)?

A classic case of ‘what the cats do when the mice are away’, the film is set in the familiar mould of the talking-animals genre and illustrate what pets are up to when their owners are not at home.

Max, the terrier’s doting owner, Katie, brings home Duke, a new found land hunk of a canine, which naturally causes resentment in Max. Then there’s Flushed Pets, an alliance of assorted abandoned creates, led by the roguish Snowball, a gritty bunny, whose agenda is to make humans pay for their insensitive and dastardly acts of forsaking their pets.

It’s obvious that the writers are animal lovers / pet owners and director Chris Renaud invests in a lot of animal psychology – for instance, that incessant wagging of tails, those lovey-dovey imploring looks at their masters, which evoke the usual sympathies and susceptibilities. But then, as the film shows, there are pet owners and there are pet (ty) owners.

The film starts off impressively with, besides the two canines, a cat who helps herself to goodies in the fridge, a poodle who switches on his master’s music system to listen to groovy music. But midway, with an abundance of characters and episodic capers, the film seems to loose steam, only to rebound later.

With some funny one-liners and hilarious scenes, the film with a relatively original concept, does have its moments of mirth.