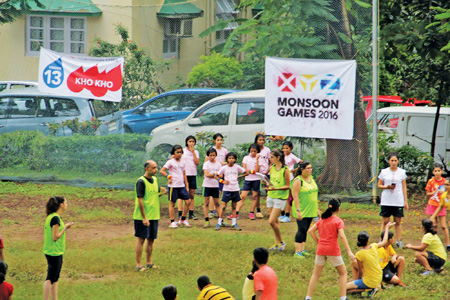 An overcast sky and the lush green grounds of Sir Ness Wadia Memorial Pavillion, Rustom Baug, made for the perfect setting for the ‘XYZ Monsoon Games’ on 26th June, 2016 as hosts – ‘Jamshed’s Giants – XYZ Group of Byculla’ pepped up the environment. 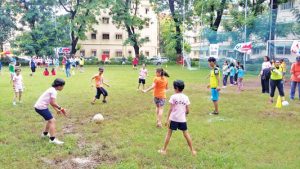 As buses from the other XYZ centres rolled in, the grounds saw 300 children from ages 4 to 15 years, donned in their team-colours, getting ready to compete in eight carefully planned and executed events, ranging from penalty kicks and bucketball for the under-7 year olds; dodge-ball and football for under-10 year olds; handball and kho-kho for the under-13 age group and throwball and football for children under 16. All the games took place simultaneously.

The organisers, volunteers and parents were astonishedto see the infectious levels of enthusiasm exhibited by the children. Girls fought shoulder to shoulder with the boys in every event, while the boys displayed a magnificent front in throwball, leaving very little place for fouls. The under-7 toddlers were a treat to watch, kicking and defending the penalty shootouts, as well as showing their skills at aiming and throwing balls in the bucket! The competition was stiff, with teammates, parents and volunteers cheering and encouraging their players, as the morning drizzle transformed to a heavy downpour post lunch. 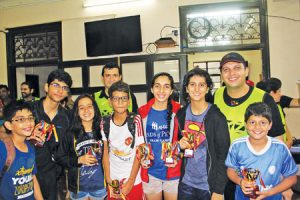 The winner and runner-up teams of each sport were awarded individual gift hampers and trophies.The Championship Trophy was awarded to ‘Cyrus’ Superstars – XYZ Group of Tardeo’ and the all-girls team of ‘Ketayun’s Conquerors – XYZ Group of Ava Bai Petit School’, stood second with a difference of a mere five points. As the day came to an end, the children trudged back to their buses and were treated to yummy cupcakes made by Parinaz Wadia of ‘Sugar-Hi’. This fabulous event was made possible, thanks to the support of WZO, Committee of The Sir Ness Wadia Memorial Pavilion (Rustom Baug), the Rustom Baug Association, New Ahmedabad Sports, Dairyland and Dezenzia.