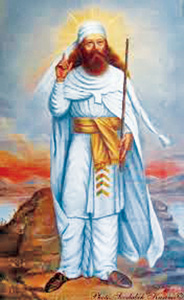 Every year Dae Mahino and Khorshed Roj is observed as Zarthost-No-Diso, i.e. the day our beloved prophet, Zarthustra left the earthly, mortal life. This year the day falls on Tuesday, the 24th of May, 2016. Considered as the first Prophet the world has seen, Zarthustra worked amongst the people, bringing peace and happiness to all. It is said that, when he had accomplished what had sent him to do, his time to leave the world arrived and he reunited with Ahura Mazda, just like most of us believe, we all will, one day.

On this day, special prayer sessions are organized and prayers are recited, with religious discourses focusing on the life and works of the Prophet Zarathustra. Being a day of mourning, it is observed as a solemn occasion. Religious ceremonies and services are confined to the agiaries or held simply at home. For those interested in knowing the relevant prayers marked for ‘Zarthost-no-diso’, Panthaki of Vatcha Gandhi Agiary, Er. Aspandiar Dadachanji suggests, “On this day, one can have an ‘Afringan’ and ‘Baj’ ceremony done in a fire temple or pray by themselves the ‘Stom -No-Kardo’, taking the name of prophet Zarathushtra and his ancestors and family members. One should also pray the lines ‘Ustano Jato Atrava Yo Spitamo Zarathushtro’ 101 times. It means we are thankful to Dadar Ahura Mazda for sending prophet Zarathushtra to this earth as an ‘Aathravan’ (priest).”

Though there has always been a debate on the time and period of his birth and the way he died, the Prophet is known to have spent almost three decades at King Vistashp’s court, till his death at the age of seventy-seven. There has also been much speculation as regards the death of our Prophet. Some historians, going by the Shahnama, believe that Zarathustra was killed at the altar, during an invasion by the Turanian Army in the storming of Balkh. However, others speculate that the person killed was not Zarathustra, and that Zatathustra was killed by a lightning strike. The version vetoing that suggests that Zarathustra was praying in a fire temple when the murderer planned to strike him but before he could, the murderer was himself struck by lightning, that was conjured via divine intervention. After this Zarathustra ascended into the sky. And yet another story speculates that he died in his sleep having lived up to a ripe, old age.

Beyond his religious significance, Zarathustra had influence on other modern-day practices. The Greeks regarded Zarathustra as a philosopher, mathematician, astrologer and ‘magician’. (The word ‘magic’, derived from the word ‘Magi’ – who were a caste of priests who followed Zoroastrian customs). It’s also regarded that Zarathustra taught astrology to the Babylonians, and that the seven-day week was created by their circle, in light of (their belief of) seven planets.