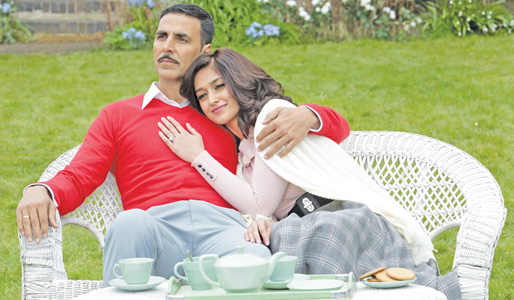 As promised to our readers in the last issue, we bring you an exclusive pre-release interview with Akshay Kumar, who plays the lead in the much looked-forward to Bollywood flick that is due to release next week – ‘Rustom’. Film critic and PT Special Correspondent Hoshang Katrak reports… 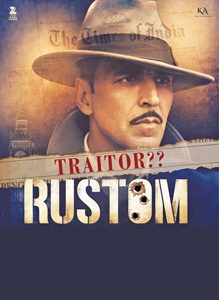 The interview was scheduled for noon on 22nd July at the Filmalaya Studio, Andheri. I realized I would miss the press show of Kabali at 11:00. No problem… Rajnikanth can wait…
I reached a half-hour early. Akshay was shooting for the sequel of the successful ‘Jolly LLB’. I settled myself down in the dimly lit antechamber, waiting for the shot to end. It did, around five minutes before our appointed time.
Spotting me in the semi-darkness, the martial arts veteran of 130-odd films strides up to me and offers a firm but warm handshake. ‘Please sit, be comfortable – I’ll be with you in a minute’ he says affably. A quick word with his no-nonsense, efficient secretary Zenobia, and he’s back. A few pleasantries later, I mention that I’ve done a bit of dubbing for the forthcoming (film) Rustom. He is pleasantly surprised.
And the interview begins…

Hoshang Katrak: 49 days from today, you will turn 49. How do you review your career of 26-odd years?
Akshay Kumar: 49 days? Oh, is it! (Does some quick math and gives me an approving grin)… I’ve been doing around 4 to 5 films a year. I’ve practically been running, at times even flying; so there’s been no time for me to sit and review my career of 26-odd years. Also, when your work becomes your passion, it is no more ‘work’ – it becomes so much fun. I’m actually having fun while I’m shooting. I go to bed with a smile every night, looking forward to the next day’s work, which I know I will enjoy. That is the time when you know everything is good in life. I’m doing my work as passionately as possible, so there isn’t any time for me to view or review my work.

“I wanted to be natural, the way my Parsee friends speak in real life. They don’t really have the kind of accents that are portrayed in films. In many films earlier, Parsees have been caricatured to show an accented style of speaking which isn’t really the case off the sets.”

HK: When you entered the industry, who were your ideals?
AK: Quite a few… Amitabh Bachchan, Sanjeev Kumar, Mehmood, I. S. Johar…

HK: When signing a film, what influences you most… the script, the director, or the story?
AK: The concept of the film – what and how it is going to be presented; has it been shown earlier; what is the novelty factor? The director comes next… and of course the script too.

HK: In your opinion, are actors born or made?
AK: (Pauses, thinks)…In my case, I’m still working towards it… I’ve not been made yet (smiles). To be a complete actor is a long, long process… and my process is still on. I don’t know about others.

HK: You’ve done a balancing act across genres… you’ve done comedy – Housefull, Hera Pheri, Garam Masala; you’ve done intense roles – Aitraaz, Dhadkan, Bewafa; and you’ve also played the tough guy – the Khiladi series. You’ve won Filmfare awards for films across genres. Which of the three (genres) do you find the most difficult to play?
AK: Slapstick comedy is definitely the most difficult, because it is never supported by the writer. The writer cannot write ‘what’ the actor needs to enact in a slapstick comedy. The actor must improvise on the sets to make people laugh. The likes of Charlie Chaplin and Laurel and Hardy – three of the greatest artistes of all times – ‘created’ the comedy impromptu on the sets. So for me, while slapstick comedy is the most demanding, it is also the least respected of genres (in India at least). To me, Charlie Chaplin is the god of slapstick comedy. Even today when I surf channels and Chaplin appears on screen,I get hooked! Even my kids get excited.

HK: Which has been your most challenging role to date?
AK: (Thinks hard)… I would say what I’m doing at the moment with Rajnikanth sir, is the most challenging – playing a negative role in 2.0.

HK: If you were to name a film you have not done, but wish you could have done… which would it be?
AK: Well, I don’t have a wish-list for a film, but for somebody else’s song (laughs good-naturedly). It is from Akshaye Khanna’s film Naqaab – I really love that song… (hums and sings tunefully)‘Ek din, ek dinteriraahonmein, baahonmeinpanaahonmein’. I just love that song – I always tell him, “Akshaye, you’re lucky to have got one of the best songs ever!”

HK: You’ve been doing exceedingly well as a hero. But if you were offered a strong character role, would you accept it?
AK: Well, I have been doing character roles… if I like it, I’ll do it. I’m an actor first and foremost. Take Khakee for instance, my role was actually written for Paresh Rawal… my character dies in the middle of the film, but I liked the role so I opted for it. 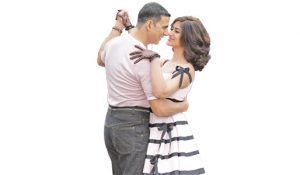 HK: If you had to live your acting career all over again, which aspect would you try to master, or concentrate on?
AK: (Thinks)… My voice. I wish it had more bass. I also wish I had a singing voice. I admire people who can go on stage and sing. [I remind him that he did sing perfectly in tune, just a few minutes ago!] (He laughs)… Did I?

HK: Any plans to direct a film?
AK: No such plans, I want to live happy.

HK: My wife is a big fan of yours, and of your wife’s writings. She tells me that you don’t normally socialize (by Bollywood standards). What is your idea of socializing or relaxation?
AK: Relaxation comes with your family… just being with your family. Like a couple of days ago, I’d gone with my daughter to watch Ice Age… that’s relaxation. That is when your body gives out those chemicals which relax you. And I’m not just saying this… it’s scientific too. (Chuckles)… my daughter sits in my lap, munches on popcorn, and asks me all those questions to which even I don’t have the answers (chuckles again)!

HK: What do you enjoy most about being a film star?
AK: You get to perform so many stunts, see so many places, romance beautiful women, play so many characters, indulge in bungee jumping and other such adventure sports which I love – with the producer paying for it all (smiles).

HK: Do you read film reviews? I know of some actors who don’t.
AK: I do read them sometimes.

HK: If the reviews are adverse, do they affect you?
AK: If after 130 films I were to get affected, then I cannot call myself a true actor!

HK: Would you say Khiladi (1992) was your breakthrough film?
AK: Yes, certainly.

HK: The first one in 1945 had a lead actor called Eddie Billimoria. He was the original He-man of Indian cinema and performed his own stunts. The second one in 1950 had an actor called Eruch Tarapore. The third and most well-known, until yours came along, was in 1968 starring Fearless Nadia and directed by her husband Homi Wadia.
AK: Ahh yes, I would love to know more about the first two Khiladi films. I’ve heard about the 1968 film, and a lotabout Fearless Nadia and her husband Homi Wadia too.

It’s a romantic thriller, a film I’m very proud of. I know that women are going to love it. When I was watching and discussing the film with someone, we both realized (I cannot say how and why) that this film is going to save many marriages.

HK: Most of your films in which your character starts with ‘R’ have done quite well; e.g. – Raj, Ram, Raju, Raja, more recently – Ranjit in Airlift, and of course – now Rustom.
AK: Oh that’s encouraging!

HK: When you signed Rustom, were you aware of the Nanavati case?
AK: Well yes, but this film is not only about the Nanavati case – it’s about a lot of other aspects as well, which have been integrated to create the story.

HK: How did you prepare for the character of Rustom?
AK: In no specific way; I just spoke normally. I wanted to be natural, the way my Parsee friends speak in real life. They don’t really have the kind of accents that are portrayed in films (gives an example of an exaggerated Parsee accent from earlier films). In many films earlier, Parsees have been caricatured to show an accented style of speaking which isn’t really the case off the sets. I told my director, “we’ll go normal for this film; just because Rustom is a Parsee, it does mean that his character needs to be caricatured.”

HK: When one sees Kawas Nanavati’s photograph, one sees a dignified and handsome man. Now after seeing you in the role of Rustom, one cannot visualise any other actor. How would you describe the film?
AK: Ahh (laughs)… I can’t say much about it, as we have not brought it to the media yet. It’s a romantic thriller, a film I’m very proud of. I know that women are going to love it. When I was watching and discussing the film with someone, we both realized (I cannot say how and why) that this film is going to save many marriages.