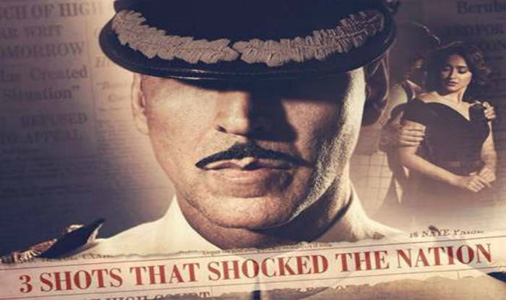 The only category left unexplored by the Filmfare folks is that of ‘Best Casting Director’. With Akshay Kumar in the eponymous Rustom, based on the celebrated Nanavati case of 1959, this lacuna should hopefully be addressed.

But first things first. The film, ‘suggested by actual events’, bears striking resemblances to the incidents of the 1959 case where Kawas Manekshaw Nanavati, a decorated commander of the Indian Navy was accused of shooting dead his wife’s lover Prem Ahuja.

Tinu Desai, in his second outing as director, helms a script which blends romance, drama, intrigue and comedy (not all of it intentional, though) to sustain the viewer for two-and-a-half hours.

The film, without much ambivalence, comes straight to the point. A couple of minutes into the film, Akshay Kumar as Rustom (the second-in-command of INS Mysore) takes reins of the ship – and the film.

Having altered the course of the ship – literally, and skipping a stop en route to Bombay, the commander returns home before the scheduled date and finds his heart skip a beat when he finds his wife missing… the hard core evidence (the love letters) though, aren’t.

In flashback, we are introduced to the foursome – the commander, his wife Cynthia (Ileana D’Cruz), Vikram Makhija (Arjan Bajwa) and his sister Preeti (Esha Gupta). Socialite Vikram is the archetypal playboy who, taking advantage of Rustom’s long periods of absence, has Cynthia on his radar for more reasons than one (sorry, can’t divulge the plot).

Sassy sister Preeti, with a perennial foot-long cigarette-holder in hand, and who puffs away to glory in every scene, abets her lascivious brother in his philandering ways.

The second half, with its courtroom scenes, provides some comic relief as Rustom – defending himself in court – gets the better of the Prosecution attorney (Sachin Khedekar).

The characters are well-developed. Of the supporting cast, the most impressive is that of the investigating officer Lobo (Pawan Malhotra), especially in the chess-playing scenes where the ‘queen’ is alluded to Cynthia’s character.

Ileana D’Cruz, in her limited screen time, gives a restrained performance. Arjan Bajwa as the licentious pleasure-seeker is passable. But it is Akshay – who we are told has ‘done the right thing in the wrong way’ – and with his dignified presence (he plays both a naval commander and a Parsee for the first time), who clearly steals the show.

It’s a period film, and the filmmakers have evidently gone the extra mile to portray the Bombay of the late 1950s (though in a few scenes, the retro look seems to be thrust upon the viewer).

But the film is not without blemishes. Rustom appears in his pristine, spotless white uniform 24/7, even while incarcerated in jail in the dead of the night. Though he acts well, Kumud Mishra as Eruch Billimoria – the newspaper publisher (modelled on Rusi Karanjia, Blitz owner) – is terribly miscast. (In my opinion, Boman Irani would have been an ideal choice.) Starting off with a Parsee accent – and a couple of colourful words (his diction coach in the film is credited to theatre personality Cyrus Dastoor), he inexplicably reverts to a normal Hindi accent.

Only the title song (the female version) is unobtrusive. The background score by Surinder Sodhi (one-time assistant to Nadeem – Shravan) is good in places.

The film, which for the most part, attempts to stay true to the Nanavati case, begs the question: How far would you go to save your marriage?