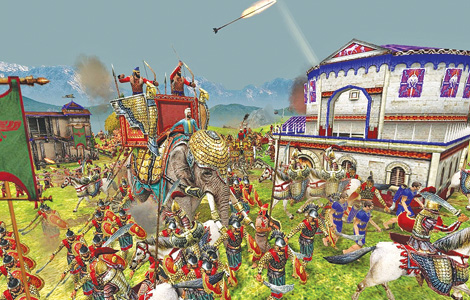 We take immense pride in our history. No Special Issue can be special enough without sharing the history of the Kings we pride. Let’s gear up for a fascinating story about the glory of our erstwhile Kings, with Dara Khodaiji’s ‘Naushirvan The Just’…

Khosrow I, (Chosroes I or Kaswra), better known as Anushirvan, “the Immortal Soul” or Anushirvan-e-dadgar, Anushirvan the Just, or Naushirvan the just, the twenty-second Shahenshah of the Sasanian empire was born in AD 501 (Some historians say he was born in AD 498). He was known as one of the greatest emperors of Persia for his fair and just rule.

He was the third son of Kavadh (Kobad)-I. Kobad while on his death-bed appointed Khusrow Naushirvan as his successor, who became king in AD 531.

During Kavadh’s reign a religious activist preached a religious and philosophical thought which he considered to be a refined and purified view of Zoroastrianism. He preached of economic and social systems, instituted communal possessions, and social welfare programmes. In all probability he can be considered the first in all history to propound socialism. His followers, the Mazdakites were loyal to Kavadh’s elder brother Kawas while the noblility and the clergy who regarded his teaching as heresy and blasphemy were loyal to Khusrow Naushirvan. Naushirvan upon coming to the throne went after them and had Mazdak and most of his followers executed.

A group of noblemen along with Bawi, an uncle of Naushirvan and a Mazdakite, plotted to overthrow Naushirvan, and install Naushirvan minor son upon the throne. This would enable the noblemen to bring Kobad’s son Jamasp (Zames) and rule as the regent. Jamasp being blind in one eye was ineligible for the kingship.

Procopius mentions that the plot was discovered, all the conspirators, all the sons of the late king Kobad together with their sons were condemned to death. Kobad, son of Jamasp, managed to escape. Naushirvan summoned wise men from different parts of his empire, and under their consultation, he introduced several administrative reforms. His vast empire was governed by several satraps independently. Naushirvan felt that the crown was unable to exercise enough influence over these domains. He established four vast divisions of his empire and appointed four viceroys in whom he had implicit faith. The satraps would report to the viceroys and the viceroys in turn would report to him. He appointed secret agents who kept him abreast of the world affairs, and also grievances of his subjects, He travelled far and wide in his realm and personally investigated into the conditions of his people. His justice was swift and certain. Mirkhond mentions of an occasion when he had had executed almost ninety corrupt officials of tyranny and extortion. His good administrative reforms and impartial justice resulted in sense of security in all his subjects everywhere. This reminds one of Dr. Darab Sanjana’s metaphorical quip that “the sheep and the wolf could drink at the same spring”.

He sent instructions to all in authority that all his subjects, be they farmers or Priests, traders or merchants, on land or at sea, their welfare should be their prime duty. He emphasized that people should have no fear of crown and his court was open to all. This earned him the appellation Anushervan or Naushirvan meaning “Of the Blessed or Immortal Soul,” and Dadgar and Adil meaning “The Just. This” It is a fact hat in ancient the King was the fount of Law and justice. This is how Khosrow I came to be better known as Naushirvan.

His reforms in the land revenue system were perfect. His army was well equipped with weapons. Naushirvan was a well-read and knowledgable king.

Two great empires, the Roman and the Persian empires had been constantly at war. Both had become war weary and the Roman Emperor Justinian was anxious to bring to an end all the hostilities. In AD 532 Justinian made truce with Naushirvan and a year later a treaty was signed for the “endless peace”, and the terms were settled.

Shortly afterwards Harith bin Jabala, a protégé of Justinian attacked Al-Mondhar (Manzar) an Arab chief and a vassal of Naushirvan, plundering his people and slaughtering them. Al-Mondhar approached Emperor Naushirvan and addressed him saying, “If thou art the Shah of Iran and the guardian of the brave, why should the Romans lord it so, and invade “Desert of the Cavaliers” Naushirvan also received representations from King of Italy, Bassaces, an Armenian chieftan and several others to declare war against Justinian who had the ambition of universal dominion. “The endless Peace” had been breached. According to Firdausi, Naushirvan never entered upon a war indiscriminately. Whenever he noticed any hostile intentions of any king it was his practice to an ambassador to his adversary and offer him a chance to desist from his intentions to invade him. Yet if the adversary was intent upon hostilities Naushirvan was capable of giving a fitting reply. Naushirwan crossed the Euphretes and marched to the city of Dura (not city of Dara as Gibbon contends), gave the warning not to resist, but it was ignored and the Great King captured it. Four days later the next town Borhoea (Aleppo) surrendered without resistance and paid of two thousand pounds of silver as ransom.Next was the magnificent city of Antioch which was defended by a Roman garrison under Justinian’s nephew Germanus.The great king now made his way home to Persia. On way he was paid ransoms by the city of Edessa, Constantina and Dara.

In the year 542 the king set forth on a renewed campaign but he had to turn back because of an epidemic of plague in Egypt and Palestine. The following he started moving towards the Armenian frontier but again due to plague in his own troops he turned back. In the year AD 551 Naushirvan found himself in an unpleasant situation. He had to quell a rebellion against him by his son Anoshazad (the Immortal Born), Firdausi’s Nushzad. Anoshazad had adopted the religion of his mother, who was a Christian. For some reason, probably of his influencing other Zoroastrians to adopt Christianity that Anoshazad had been interned at Jund-i-Shapur. On hearing a rumour that Naushirvan had taken who was on a campaign against the Syrians had taken ill and died. He readily believed this rumour and summoning the Christians throughout the kingdom proclaimed himself the king. Not only he gathered a force of thirty thousand men out of the treasures his mother had put to his disposal, but he also was counting upon the help from the Roman emperor.

Naushirvan sent a letter to the Warden of the Marches (region in central Italy) instructing him to lead an army against Nushzad. The great and the good king also instructed him to act in moderation and to effect reconciliation, but in case of a conflict, to bring the wayward prince alive. Nushzad’s force consisted of Christian chiefs and clerics led by a Priest called Shammus. A Persian knight in a chain armor advanced and declared that the Prince should not oppose the Royal army. He should beg for the King’s mercy. The prince was adamant to fight. A fierce battle ensued in which Nushzad was mortally wounded. He called for a bishop to make a final confession. He somehow spoke to the Romans and said, “To fight one’s sire is vile and accursed.”

In 572 AD the Persian forces were defeated and besieged by Marcian, the Roman Magister Militum. Now in his late sixties, Naushirvan marched to and was compelled to raise the siege. It took Naushirvan six months to quell the Romans. They took 2,92,000 captives. Romans had to purchase a year’s truce by payment of 45,000 aureii (Roman gold coins) to the Persians.

Rome’s Justin was prone to temporary fits of madness and so he chose Count Tiberius on the advice of his wife empress Sophia as his colleague, and adopted him as his son. Tiberius was ambitious and had no intention of keeping peace with Persia. He amassed a huge army but such was the terror of the Persian forces that even before the campaign could commence the Roman Emperor sent an embassy to Naushirvan asking for extension of three year’s truce. At the expiry of three years, the hostilities resumed. Persian generals Mobodes and Sapoes destroyed Roman Armenia, and general Tamchosro ravaged the country around Amida. The Roman general Maurice made a counter-attack, destroyed the fort and looted Parsarmania. It is strange that Tiberius sent embassy with an offer to Naushirvan that he would evacuate Parsarmenia and Iberia, surrender Arzamene and Aphumon, and even pay a huge sum in gold if he had really captured and destroyed Parsamania.

Unfortunately whilst the Roman ambassador was on way with these terms Khosrow Naushirvan passed away September 3, AD531. His son Hormazd II succeeded the Great king to the throne as the twenty-third king of the Sasanian Dynasty.

Naushirvan-e-adil, Naushirvan-e-dadgar, Plato’s Philosopher King (as the Greek refugees whom he had allowed to stay in his empire called him) led the Sasanian empire to the Zenith of its glory. He was the greatest king of this dynasty and one of the greatest kings of all times.