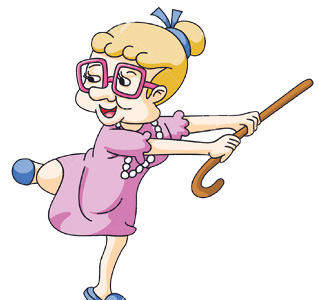 And so it came to pass (sounds Biblical) that our dear Meherbai received an invitation to her old girls’ association from her school. The invite was for the ex-students along with their respective spouses. Meherbai was overjoyed while her bitter-half, Meherwanji said, “Your friends will die with envy when they see you. You have the same lust for life as you had when we got married 44 years ago!”

“But I have put on so much weight! My hips are now like a wall-to-wall carpet and my WAIST-line has now become a WASTE-line. Also, I’m almost a hundred kilos, actually only 99.5!”

“Mehra, my kaleja, I love all hundred kilos of you!”

“We’ll both go on dodhi-no-soup diet, so I can lose some kilos, Ok?

“Yes dear” said the doting husband, who in any case, slyly ate outside food daily on the pretext of going to the bank or the share brokers, since Meherbai was a lousy cook who couldn’t break open an egg or roast a papad (Bhujio Papad Bi Nahin Bhangaye)!

“Oh dear! I’ve forgotten how to dance – totally out of practice! Meherwanji, will you practice the Rumba, the Samba, Cha-cha-cha and the Tango with me daily? Also, I’ll join a Salsa dance class so I can do the Salsa with the handsomest guy at the re-union!”

“Baby, I’m all for Rhumba, Samba and the Cha-cha-cha, but please spare me the Tango- Tango Karta Karta Hoon Pengo Thaee Javas.”

“Done! Will you do witty conversation with other ladies so that they are zapped by your intelligence?” “Of course, dear. I’ll talk of our foreign travels and international politics.”

“Will you talk of films like Dolly’s husband does?”

“I can’t help it if this Dolly’s Dolla has an IQ below zero and he talks only about films.”

“See, typical of a husband to put down the man his wife praises- ADEKHO jealous TOM-CAT!! Before marriage, you were the life of a party and could charm any woman in the room. That’s why I married you. Please, please be extremely charming and don’t drink like a fish like you usually do and get knocked out. Also, don’t pile your buffet plate like a huge Sahyadri-mountain with all kinds of food. Leave something for others.”

“But, Khursheed’s husband, Khushru- Khadhro always does that and nobody says anything.”

“Yes dear, that’s why he’s called ‘Khadro’. I’ll die if anyone says that for you.”

Meherbai lived on dodhi-soup for the next two weeks while every Monday, Meherwanji quietly went to the Rippon Club for chicken curry-rice, Wednesdays for Dhansak, and Fridays to Delhi Darbar for their ‘Jummey-ki-Biryani’. Tuesdays and Thursdays he visited next door neighbour Banoo-Batak who fed him bhakras and popatjees with great pride saying, “I have made them myself!” Now Banoo Batak loved tall men and showed her love through bhakras and popatjees. Meherwanji was tall and she came only up to his navel. So she would climb a small wooden stool to feed him lovingly with her own hands. Meherwanji enjoyed this fussing and female attention since he never got it at home (Ghar ka Murga Tuvar -ki- Daal Barabar).

At the party, Meherbai whispered in Meherwanji’s ear, “Don’t just sit there, say something! Remember – Sparkling conversation?? Come on!! Sparkle!!!” He got the cue and said, “Kanda, Papeta ketla mongha thayaaj!” Meherebai was aghast and kicked him under the table, whispering “Politics! Discuss politics.” Once again the hubby got the cue and also a verbal-hemorrhage as he spoke of Hillary Clinton, Donald Trump and the Trustees of the BPP (local politics as he called it). Everyone agreed that the once-opaque BPP has now become transparent and has cleaned up most of the dirty-mess it had inherited.

Dolly’s Dollo also butted-in filmy-style. “Yes! Yes! Our dearest Trustees are like those seven guys in ‘Seven Brides For Seven Brothers’ in Hollywood or ‘Sattey Pe Satta’ in Bollywood. Everyone clapped for the new Trustees and then got up one by one for their drinks. Meherwanji saw Chivas Regal Scotch Whisky and had one too many with the result that his face looked flushed and pink. Dolly’s Dollo came running to Meherbai, saying, “Tamara Va Red Label Jeva Lal Thayi Gayaj.”

Oh God, thought Meherbai, time for some damage-control. She ran towards the bar and what did she see? Meherwanji kneeling on one knee on the dance floor with a rose clenched between his teeth and some ladies holding his right hand and dancing around him in a circle, like a gramophone record, cooing: “You are so sporting and full of fun. Do you do this every day at home with Meherebai? She is so lucky to have you!” Meherwanji kept saying, “Thank You, Thank You, for your kindly kindness!”

Meherbai was never so embarrassed in her entire life. To do a tit-for-tat, she went to the bar and guzzled a few Parsi pegs of whisky and also one Bacardi, two Bloody Marys and three Pinacoladas to teach Meherwanji that whatever a husband can do, the wife can do better. She promptly got swazzled.

She shouted to the DJ, “Play Chikni-Chameli, Sheila-Ki-Javani and that Fevicol song! I want to dance.” The DJ blasted these red hot item numbers and Meherebai danced with more verve than Malaika Khan, Katrina Kaif and Kareena Kapoor put together- all hundred kilos of her were suggestively shaking, wiggling and doing chiggi-wiggy, while she held her Gara-Ni-Sari upto her knees with both her hands.

“Truly, she can set the dance floor on fire” said Dhanji Daku while Piroj Pehelvan (all of 45 kilos) said “Maherbai, next dance Mahri Saathey.” Behli Bevdo patted Meherwanji on his back, saying, “You lucky dog! What a sexy woman you’ve married.”

Marerey! Hoon kai Cindrella cheoon kay? Tamari junni-purani Fiat su Pumkin bani jasey-ke? She was in a really romantic mood and said, “Come here my Prince Charming and give me a huge passionate lip-lock. She grabbed Meherwanji and gave the poor fellow a tight lip-lock, with the result that the poor man’s dentures as well as Meherbai, both fell on the dance floor and as luck (bad-luck?) would have it, the electricity failed and there was total darkness and pandemonium and Meherwanji shouted on top of his lungs “Every one freeze! STATUE! Nobody moves. My teeth and my wife have fallen down. Keep STATUE until both are retrieved.”

Thanks to cooperation from everybody, his dentures were soon found and that too – intact! In the meanwhile, Meherbai had almost fainted thanks to her exhaustive dancing. Some water was sprinkled on her but Meherwanji suggested “Khasroo Soogharo” (What a loving husband!) Meherbai soon regained her composure but refused to go home. She shouted once more to the DJ “Play ‘Anarkali Disco Chali’, ‘Zandu-Bam’ and ‘Halkat Jawani’. I want to dance some more.” She grabbed Meherwanji’s hands in a tight grip once again and started dancing with every one clapping and cheering while Meherwanji felt terrible dancing under duress.

The school reunion wound-up in the wee hours of the morning and Meherbai and Meherwanji returned home with the doodhwala.

The next morning, many couples phoned and thanked Meherbai for being the life of the party and making it a grand success. In the next few days, she received an invitation from Shiamak Davar who heard about her and invited her for his next dance event. Master Marzi too saw the party video and invited her to Zee TV’s ‘Dance India Dance’ show in their item number special segment.

Rustom Baug Association invited her to judge the next year’s ‘May Queen Ball’ while BPP invited her to be their ‘Calendar Girl’ the following year. So, you see, just by going to one school reunion, Meherbai became very famous in the Parsi community.

Since Meherwanji loved his wife and was a supportive husband (under duress), he took her to all such functions and several more in his ‘Junni-Purani Rickety-Wickety Fiat’.

“Merwanji, my mutton roll, we are both VIPs now!” He replied, “Yes dear, we are both Very Idiotic Persons.” And they lived happily ever after!