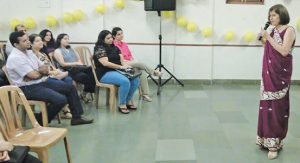 The Lagan Lounge, Bombay Parsi Punchayet’s matrimonial initiative, held its quarterly event on August 20, 2016 at the Dadar Athornan Madressa hall. This time, the number of Parsi/Irani Zoroastrian participants increased with a count of over 20 individuals more than those participating last time – taking the count to a total of  66 spirited guys and gals from our community. This is a result of the fun and innovative team games and themes taken on by the renewed avatar of The Lagan Lounge – and this time it was a Karaoke evening!

The core founder of the Lagan Lounge, Arnavaz Jal Mistry started off with welcoming the participants. This was followed by an ice-breaker game and self-introductions. Next was the team Karaoke event, which had the participants enjoying themselves amid talent and competitiveness – and ending in a tie between both teams. Prizes followed. Individual Karaoke rounds were dedicated to others, and had all the participants swaying to the music.

As always, much gratitude to the Dadar Athornan Madressa Trustees for allowing the free usage of the hall, as also the team responsible for the resounding success of the event – Yasmin Jal Mistry, Hutokshi Dadabhoy, Zubin Darashaw, Kerfegar Eduljee and the volunteers.

The idea of the platform is to introduce and encourage our community youth to get to know each other, and hopefully play cupid in finding their better halves.