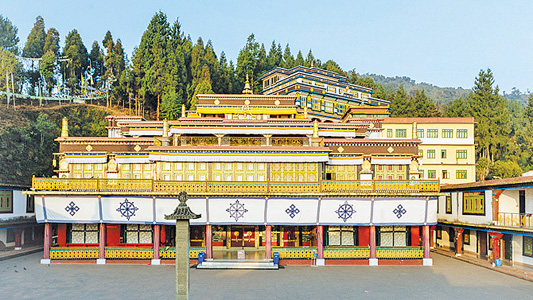 It’s a beautiful clear morning, you wake up fresh with the clear crisp mountain air in your breath. You step out quickly because not every day can you witness this breathtaking sight – the glowing Kanchenjunga Peak in the distance! While the rest of the area around is still enveloped in the dark blue of dawn, the morning sun has already spread its orange glow on the beautiful mountain top! It’s magical and you realize that coming to Sikkim was the right decision! 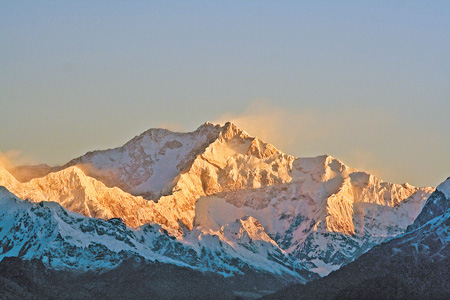 But, for those of you who still haven’t really thought of Sikkim as a holiday destination, let me take you through some of the unique attractions of this peaceful State in the north-east of India. Known for hundreds of its ancient Buddhist monasteries, Sikkim is also an ideal place for adventure and culture enthusiasts and naturalists. Its snow–clad mountains, verdant hillsides, nearly 600 different varieties of rare orchids and fields and forests flush with rhododendrons, terraced paddy fields, dense forests, and 200 ancient Buddhist monasteries, need to be seen to be believed! And, in some places you can even ride Yaks, which are mainly reared for their milk and meat.

There are lovely places in and around Gangtok – It has probably the largest number of monasteries in the world. And do you know that it’s the country’s first litter and spit-free zone? Gangtok’s many attractions include the Namgyal Research Institute of Tibetology, the Raj Bhawan and the Secretariat complex, Tsuk-laKhang for its wooden images of the Buddha and the Bodhisatvas, the 200-year old Enchey Monastery, the Deer Park, the Institute of Cottage Industries; and the quaint Lall Market where you can pick up traditional handicrafts as souvenirs and gifts for people back home.

Nathula Pass, at 14,140 feet, is famous as the ancient trade route between India and Tibet (remember your school history and geography lessons?); the sacred Tsomgo Lake at 12,400 ft which is believed to change colours according to the weather (you will need a permit to visit it); the famous 8th century Pemayangtse Monastery, which is also the venue for the annual Chaam dance festival; Dzongri, Ganest Tok and Pelling for closer views of Mt Khangchendzonga; and the Rumtek Monastery. Want a wish fulfilled? Come to Lake Khecheopalri 33 kms away, and just ask for the world!

Head for Menmecho Lake, (for which you require a permit) an excellent place for trout fishing, and Sampruptse which has a huge statue of Guru Padamasambhava, the highest in the world, which was installed by His Holiness the Dalai Lama in 1997.

Remember that distances of 50 kms or 100 kms may not mean too much to you living on the plains, but in the mountains they can become very long and tedious! And, here dusk settles earlier…. So be careful.

Looking for some adrenalin rush? Take an exhilarating rafting trip on the Teesta River and also enjoy the scenic beauty along the banks. Not only is Sikkim a trekker’s delight but also a wildlife enthusiast’s and photographer’s dream come true. With vast unspoilt mountain ranges, unique wildlife, national parks and sanctuaries, and amazing views of Kangchendzonga, Sikkim is the place for you this time!

Club your visit with one or more of the colourful festivals like the Chaam Dance Festival, and the Gangtok Food and Culture Festival and get a chance to probably taste the Chhang or Jaanr – a fermented cereal-based mild alcoholic beverage served in a cylindrical wooden vessel.

Sikkim is an extremely eco-sensitive area so try to travel with a guide who will take you through designated trails and help you understand the local culture. Remember to dress modestly, don’t disturb wildlife, and don’t buy endangered species of flowers or antiques.

The best time to visit Sikkim is from March to June and September to December. Create a circuit with professional help so that you can get the best out of your trip. My advice will be to try and combine your trip with a visit to Darjeeling and Kalimpong in neighbouring West Bengal. It can become a delightful journey. The nearest airport to Darjeeling and Gangtok is Bagdogra and railhead is New Jalpaiguri.