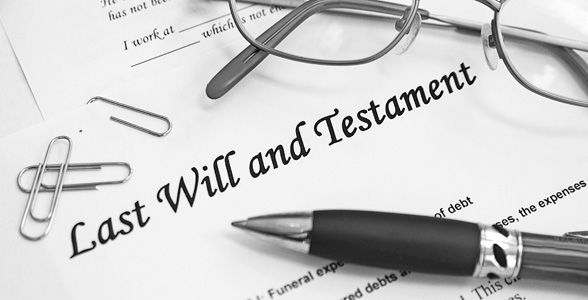 Parsi Times is pleased to start a new fortnightly column for our readers providing them the finer aspects and nuances of LAW, as relevant to our community. We look forward to your queries and responses at feedback@parsi-times.com.

Do you have the will to protect your loved ones after you? Marzee Kerawala, a certified financial planner and owner of ‘NiveshIndia’, tells you about the need to get your will made and to further register it to ensure your assets are distributed amongst your loved ones and not unnecessary contestants, who take advantage of the Parsi Personal Law.

Sorabji Mistry’s son Zubin got married to Pooja Chatlani in December, 2014. It was a court marriage as Zubin’s family (especially his father, Sorabji) didn’t approve of his son’s inter-caste marriage. Zubin was the only son of Sorabji, who had made it amply clear to Zubin that if he marries a girl outside the community, he will not be allowed to stay in Sorabji’s 3BHK posh flat at Wadala. Nor will he have any stake to the property after his father’s death. After marriage, Zubin and his wife Pooja both had moved in a rented place in the suburbs. Recently Sorabji Mistry died intestate i.e. without making a will. Zubin quickly moved to court to gain ownership rights of his father’s property. Though his father had nominated his wife Khorshed in the said flat with the society she had to fight the legal battle and ultimately had to share half property with Zubin as he is considered a Class 1 Heir under Parsi Personal Law. All Class 1 heirs have equal right over the assets of deceased.

So what went wrong in the above case? Though Sorabji had put his wife’s name as a nominee, in absence of a will, the law decides how the distribution of assets will take place as per the person’s religion. Succession planning should not be so complicated. We all want that after we are gone the assets should be passed on to our loved ones who were with us through thick and thin. But unfortunately in the absence of a will, the law takes its own course and the distribution of assets will be as per personal law governing the deceased instead of wish of deceased. A Will makes matter simpler.

A will is a legal document signed by the will’s maker and witnessed by other two other persons, wherein the will-maker expresses his/her preference of how his/her personal assets will be distributed after he/she passes away. A simple will can be a hand written document, it need not be registered and can be in any language. However if you suspect there could be foul play in the family and your will can be contested after your death, it is advisable to take help from an expert and get it registered. This will help you to avoid loopholes, overlaps or contradictions, if any, as also help you revise it in case you change your mind in future. Relationships and situations change. Your assets and liabilities also increase and decrease and therefore it is necessary to review your will once in four or five years. Also, if the property is bequeathed to two or more person, clarify the proportion of ownership and to whom the property should go to, in case of death of either of the beneficiary. If you want your children to have the property but also ensure your spouse’s rights, mention it that you want to give absolute right over such property to spouse.

As per Parsi Personal Law, a will made before marriage is not valid post marriage. However, if you separate or divorce after making a will, your will would remain valid, and that is true for all communities. However, note that unless you revise your will, your spouse is entitled to have a claim on your assets!

Whenever I talk to my clients they say they have chosen nominations. Joint holders and nominees only add up to their confusion. Legal status of a nominee is just a guardian/custodian/trustee to the underlying asset on behalf of legal heir. This simply means that if I have a dependent brother as my nominee in Fixed Deposit and I want that this FD money should solely go to him after my death, my spouse can still claim money on this FD by way of succession Act in absence of my will. Also joint holders means all holders are equal owners of that property/financial asset and each owner has the right to bequeath his/her portion. I have seen cases where a father has put his son’s name in the property as joint holder to avoid future complication so that his son gets the property without any legal hassles in future. But if need be, and the father wants to sell that property to secure his retirement and if his son refuses to sign the agreement, he (father) has no choice but to plead helplessly for signatures in his old age. So be very sure when you put somebody as joint holder in a property. It is always better to have it in your sole name and put actual beneficiary as nominee and also mention that in your will.

Moreover it is always advisable to have a list of alternate beneficiaries in case you outlive your beneficiaries. In case of our Parsi community, most of the elderly who are not married and don’t have beneficiaries, or if the actual beneficiaries are not alive, should make provisions to distribute the wealth to charities of their own choice. Also prefer to have witnesses who are much younger than your age. Amending a will does not necessarily mean writing a fresh will, a ‘codicil’ should be sufficient. A ‘codicil’ is a document which is used to make small specific changes to the main will or tweaking your will. If the will is registered, than you need to register the ‘codicil’ as well to make it legal. For those who have registered their previous wills should register their subsequent will and codicil to avoid legal challenges over the authenticity of a revised will. Although all old will/wills stand cancelled when you make a fresh will, it is always advisable to destroy all the copies of past will/wills to avoid any scope of contest in future.