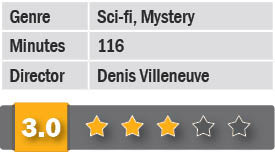 Whether the title refers to the appearance of the alien spaceship or the advent of a newfangled but groundbreaking film of the sci-fi genre, only time can tell (with around three months to go for the awards’ season). Spaceships turning up on Earth accompanied by blaring sound effects, appalling alien characters emerging from them, the inhabitants of our planet being  terrorized, Heads of State (read US President) ordering surgical strikes or, in the least, troops to be on standby — are all eschewed in director Denis Villeneuve’s ‘Arrival’, based on the novella ‘The Story of Life’ by Ted Chiang.

A life-threatening disease has claimed the life of the young daughter of Dr. Louise Banks (Amy Adams), a renowned linguist. Twelve spaceships have landed (strategically?) in various parts of the world, including Russia, China and Japan, even as TV anchors around the globe go into overdrive with their own fanciful interpretations (wonder what Arnab Goswami would have said?). Banks is summoned by Col. Weber (Forest Whitaker) of the US army to help decipher some mystifying sounds associated with the spaceship. Teaming with astrophysicist Ian Donnelly (Jeremy Renner), the good doctor tries her best to make sense of the weird emoji-like language that has confounded the twelve nations.  At second glance, Villeneuve seems to have come up with a no-nonsense sci-fi film without the usual trappings associated with the genre.

Amy Adams underplays her role — with those perplexed looks — to perfection; with Jereny Renner lending helpful support, while Forest Whitaker’s accent, at times, could be mistaken for that of the aliens’. Johann Johannsson’s unobtrusive score glides the film along seamlessly. The slow and sedate pace of the film may work to its disadvantage as also the exclusion of the trappings identified with the sci-fi genre.