A passionate collector and connoisseur of cycles and motorcycles, Kerfegar Eduljee reviews the all new ‘Himalayan’ motorcycle by Royal Enfield

Visually, the launched-this-year Royal Enfield (RE) Himalayan with a 220mm ground clearance comes across as a relatively tall adventure motorcycle, which can be rather intimidating to individuals who are challenged in the in-seam. Pleasantly, once astride, you figure the seat height at 800mm is pretty acceptable. One then settles in the comfortable seat gripping the nice flat handle bar – and is greeted with a rather busy looking instrument cluster.
Thumb the electric start only – overhead camshaft long stroke 411cc (24.5bhp and 32Nm) engine, and the bike settles in a relatively pleasing unenfieldisque thump from its purposeful upswept aluminium silencer. Putting the CV carburetted bike through its paces one notes that the counter balancer is playing its part to mitigate the vibes, in this ground-up designed oil/air cooled engine – an RE first. Another first for RE, is the monoshock (linkage) suspension with an adequate 180mm of travel. The 41mm telescopic forks have a travel of 20mm more. Note the word linkage above, as the said is not the de rigueur direct mount on the frame/swing arm type. This feature along with the new half-duplex split cradle frame ensures that the 182 kg (kerb weight) Himalayan has a great ride. The tubing of the frame is square shaped, aka the Yezdis and Rajdoots of yore. 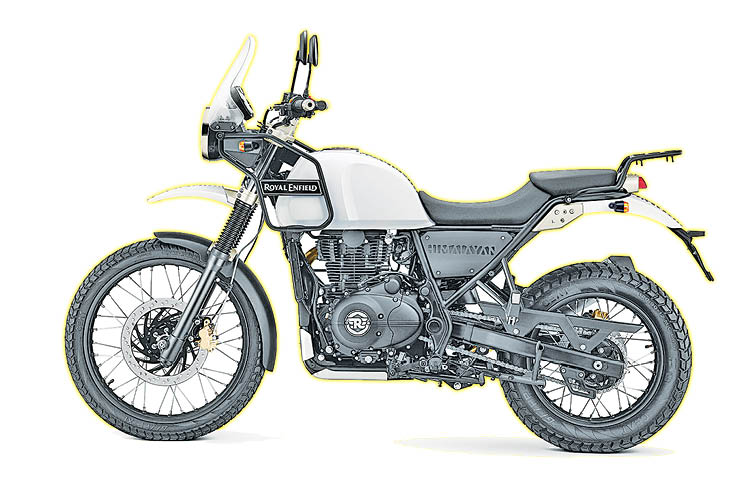 Available in two colours Granite black and Snow white, initially the industrial looks of the bike take its time growing on you – much longer than the ride does, as it is the overall ergonomics and the ride quality that impresses the most. Guess then it’s a win of function, over form.