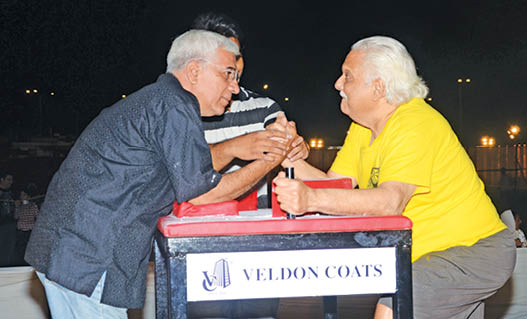 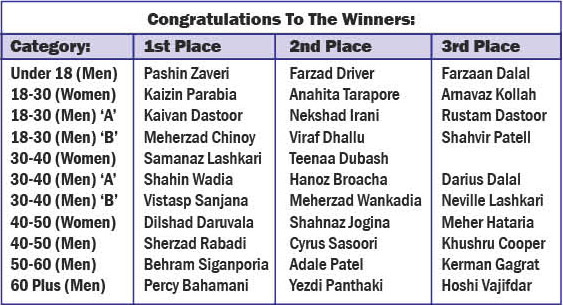 For the first time in Mumbai, on 19th November 2016, an All-Zoroastrian Men And Women Arm Wrestling Competition was held. It was meticulously organized by Rustom Jasoomoney along with assistance from Freddy Driver, Khodadad Yazdegardi, Minoo Khan, Adi Pardiwalla and the staff of Parsee Gymkhana (PG). Technical guidance and supervision was given by Maharashtra State Arm Wrestling Association.

Sponsored by Zoroastrian Bank, Veldon Coats, Dunnes Institute and Wibs, with Parsi Times as Media Partner, the tournament saw 68 participants from Ahmedabad, Surat, Navsari, Nagpur and Mumbai. They were grouped based on age as under – Juniors (under 18 years), Seniors (18-30 years) and Masters (40-50 years), Grand Masters (50-60 years), Super Class (over 60 years) and Team Championship, where wrestlers could form a team of four with any combination of men and women.

Hutoxi Doodhwala commenced the event with an address and Peshotan Mehta of Nagpur, who at the age of 82 years won the National Arm Wrestling in the Ultra Super Class in 2005, inaugurated the event. He was felicitated with a memento. Guest of Honour Hanshi Bahamani, 8 Degree Karate Black belt and 4 Degree Kudo was welcomed with a shawl. PG also felicitated famous Parsee personalities like Dara Panthaki, an all- rounder in the field of sports who represented Gujarat in wrestling;  Pesi Patrawalla, who won the title of ‘All India Best Developed Parsee’ in 1956 and competed in body building, weight lifting and wrestling; Kersi Kasad, Mr. Bombay in Body Building, and in 1961-62 became Mr India in Tall Man Class; and Viraf Panthaki who represented Maharashtra and India in weight lifting.

The competition started with the referees explaining the rules and fervent participation amongst men and women exhibiting impeccable technique, endurance, arm strength and resistance. Medals were awarded to the winners while a cash prize of Rupees twenty-five thousand was awarded to the team champions. The function concluded with a scrumptious dinner.