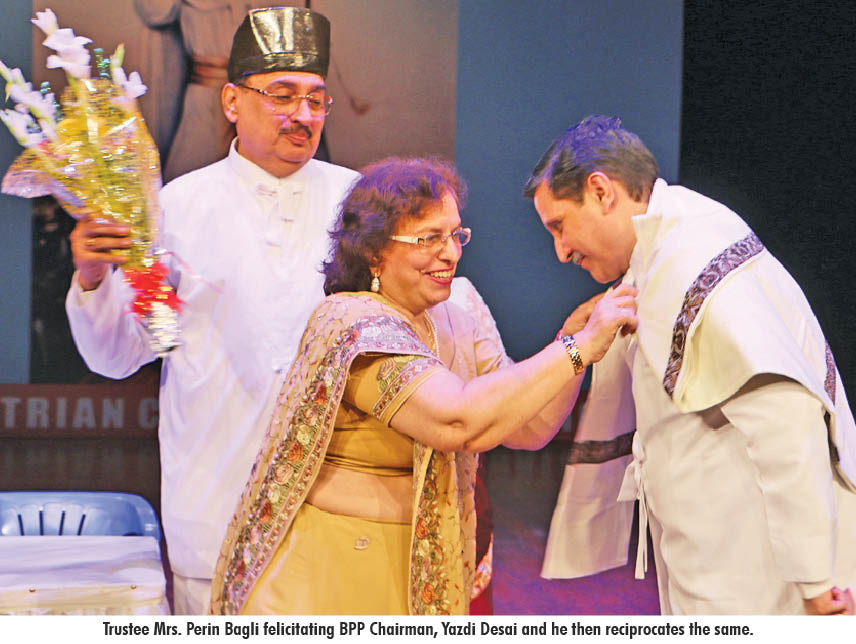 Zochild Day, which empowers children with a platform to showcase their talents and make new friends, celebrated its 14th edition on 27th November, 2016 at NCPA’s Jamshed Bhabha Theatre. It commenced with Chairman Founder Sensei Vispi Kapadia hoisting the Zochild and Indian flag, followed by Zubin Sanjana from Salsette paying tribute to the inspiration behind Zochild Day, late Fareena Kapadia, daughter of Vispi and Shiraz Kapadia with the song ‘Pal pal dil ke pass’. The girls from Avabai Petit High School, Panday Girls High School and Alexandra Girls English Institute sang the melodious ‘Zochild song’, after which 77-year-old Marazban Wadia sang an ode to Pak Iranshah. Er. Rohinton Mehenty recited and explained the Din No Kalmo. Next was a hip-hop dance performance by Farhad Patel from Surat followed by a brilliant show of gymnastics by the Avabai Petit girls. Compere Hoshedar Khambatta was applauded for flying down each year to host the event.

Chairman of WZO India, Dinshaw Tamboly addressed the youth to respect and value their parents and teachers, emphasising on how lucky they are to be a part of the Zoroastrian community. He went on to term Zochild as ‘not just a day, but a movement’. This was followed by the Navsari children performing a dance tribute to the 26/11 attacks, and students of Activity High School performed a skit called ‘Chandrakant No Thayo Dehant’, which left the audience in splits. Their Principal, Perin Bagli then called upon Vidhushi Dada, Founder of Clone Futura to enlighten the students about the dangers in the cyber world and the need for online safety, with the help of a presentation created with the aid of Cyber and Maharashtra Police.

The awards ceremony was next where Zochild Awards were given by Trustees, Sensei Vispi Kapadia, Shiraz Kapadia and Perin Bagli to those who made significant contributions and achievements in their respective fields. This was followed by baroda’s Burzin Contractor who regaled the audiences playing the keyboard. Post lunch catered by Jimmy Gadiwala, Malcolm Baug performed a play on Yazdegerd III (the last Sassanian King), followed by dance performances by Godrej Baug and Avabai Petit School, with Gamadia Colony performing the grand dance finale. The flag was brought down with the boys from J.N Petit, Pune singing ‘Chayye Hame Zarthosti’ on a parting note.

View all posts by Khushnuma Dubash →