Yazdi Desai, Chairman, BPP: “This is my sixth address as Chairman of the BPP to our community through the BPP Connect. I choose to especially address the community in view of the unnecessary controversies that have reared their heads, that need to be quashed based on the truth, not fuelled by hearsay. On behalf of my Board of Trustees, I would like to update you on the same via this platform extended by Parsi Times.”

BPP’s Stand On ‘The Heritage Walk’ At Doongerwadi 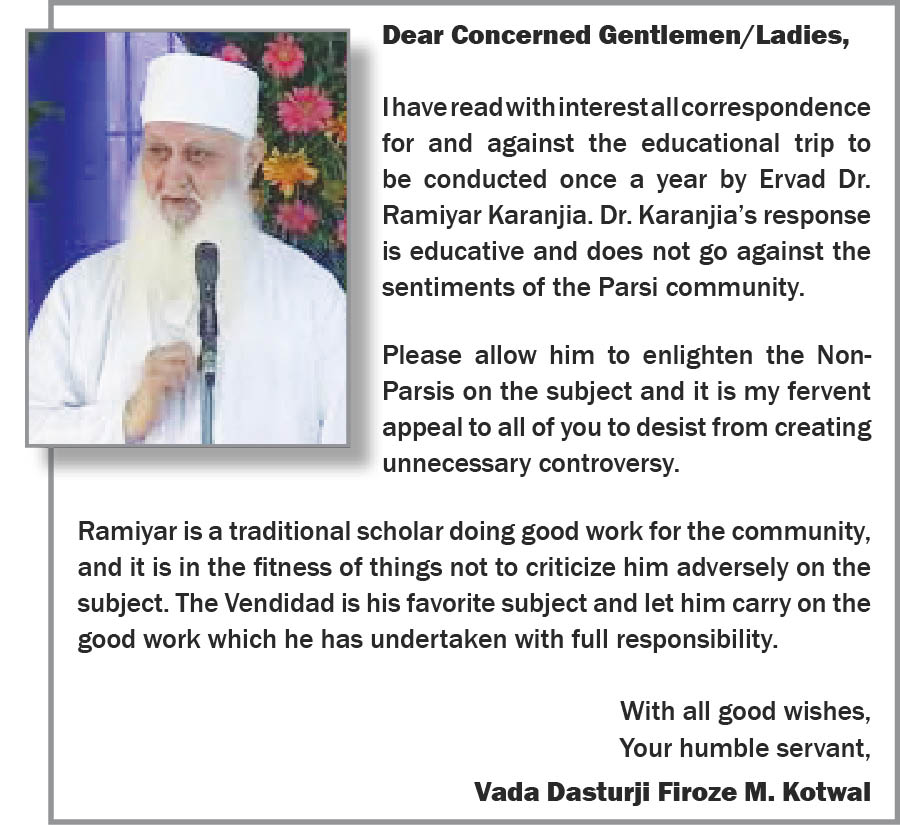 Since 2007, every year, an educational heritage walk is organized at Doongerwadi for students of Wilson College who study Comparative Religions. This walk is organized  by their Parsi college professor and is conducted by Ervad Dr. Ramiyar Karanjia, Principal of the Dadar Athornan Madressa. Since last year, this Walk is being organized under the umbrella of the ‘Asiatic Society Mumbai Research Centre’. Permission is sought from the BPP for this annual Heritage Walk and the BPP has, since 2007, permitted it. The duration of this Walk is just an hour, comprising no more than 30 participants, during which Er. Ramiyar explains the Dokhmenishini system and answers questions from participants about our mode of disposal of the dead. The Walk is scheduled especially after 11:00 a.m. to ensure it doesn’t coincide with any funerals. The participants are allowed entry only in the pavilion, where typically non-Parsis are allowed to sit during funerals. Since Er. Ramiyar accompanies the group, the BPP has been comfortable giving permission for the Walk, as we are confident in the assurance that Er. Ramiyar conducts the Walk keeping in mind the full respect towards the sacrosanct essence of Doongerwadi and scrupulously follows its prescribed do’s and don’ts associated with Doongerwadi.  Over the years, there hasn’t been a single complaint from anyone regarding these Walks. And for the record, Er. Ramiyar doesn’t charge a paisa for accompanying the group – he does this to share the knowledge about the greatness of our religion, in his capacity as a priest, religious scholar and an educator, with those who look to be seriously educated about the same.

This year, the notice for this walk was carried digitally by Zoroastrians.net, an online community website. On reading this, a few Parsis were appalled as they mistook this as an affront to the religious sentiments of the Community, thinking that this was converting Doongerwadi into a tourist site! Whatsapp messages were sent around by one or two Parsis living abroad expressing concerns and castigating the Trustees and organisers, using expletives like ‘haram khor’ and ‘low life trustees’.

The Parsi Voice, an orthodox community newsletter, wrote an open letter to the BPP Trustees expressing their apprehension regarding the Heritage Walk and requesting us to rescind the permission. Er. Ramiyar responded to The Parsi Voice letter. The Parsi Voice letter was put up for consideration at our Board meeting last Tuesday. Er. Ramiyar’s response made sense and the Board decided not to take back the permission given for the Heritage Walk, which is scheduled this Sunday.

Given below are the BPP’s reasons for granting permission for the Heritage Walk at Doongerwadi:

Why BPP Cut The Umbilical Cord With ZYNG

When the new BPP orthodox Board took charge in 2008 with Dinshaw Mehta as Chairman and 2 WAPIZ Trustees and Noshir Dadrawalla being elected, there was a strong current of expectation that things would start looking up for the Parsi/Irani community and the many ills plaguing the community would be addressed – one of them being the declining Parsi population. The then BPP Board was convinced that the best way to increase the Parsi population was to have our youth interface on a continuous basis, thus encouraging greater opportunity for romantic liaisons and increasing the possibility of marriages and more children. Apart from providing priority housing to newly married couples, the then BPP Board of Trustees decided to encourage the formation of a youth wing. The timing was perfect. Both Dinshaw Mehta and Khojeste Mistree had children who were in their prime youth and sufficiently motivated to take forward this BPP Youth initiative. Thus were sown the seeds of ZYNG. The objective was clear – to offer a platform to the youth of our community to come together, intermingle and marry. The BPP committed a budget of Rs. 10 lakhs every year on ZYNG, to be spent on various youth events for achieving this objective.

Unfortunately, over the years, politics crept into the Core Committee of ZYNG and there was a distinct polarization of camps within ZYNG. The Core Committee of ZYNG was also packed with youngsters drawn mainly from elitist families who displayed a certain level of snobbishness and arrogance which alienated the middle class Parsi youth which, inspite of having registered, increasingly kept away from most ZYNG events. ZYNG’s claim of having 4500 members remains an empty boast with barely 200 youth turning up for many of its events, and one sees only the familiar faces repeatedly at most events.

By 2013, the reluctance of the ZYNG Core Committee to establish a mechanism to measure the achievement of the prime objective of creating a platform for the youth of our community to come together, intermingle and marry, relegated ZYNG to an irrelevant forum of just ‘maja masti’. Repeatedly, at the meetings of the Federation of Parsi Zoroastrian Anjumans of India (FPZAI), many representatives expressed concern that the BPP was throwing away precious money to support ‘fun events’ where the youth are known to have gone on drunken binges. The ZYNG Calendar with skimpily dressed girls also came in for heavy criticism from many representatives.

For all its avowed assertions of being apolitical, the ZYNG Core Committee clearly took up political positions. The final straw came in October 2015, when ZYNG refused to share its data base of members with the BPP and many Core Committee members enmasse endorsed Viraf mehta as a BPP Trustee elect. Today, ZYNG has lost its relevance in the BPP’s scheme of things meant for the benefit of the community and genuine welfare of the youth – leading to the inevitable decision for the BPP to cut the umbilical cord with ZYNG.

The BPP has taken up the onerous task of setting up a new platform to engage the Parsi youth in charting a brighter future for the community.