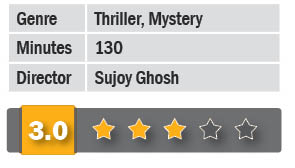 When once asked why he didn’t make romantic films, Alfred Hitchcock had famously replied, “If I made Cinderella, they would be looking for a body in the coach.”

Vidya Balan had made Sujoy Ghosh’s female-centric Kahaani a sleeper hit, with its climax unfolding in the dying moments of the film. Four years later, the suspense in K2 (this one is not a sequel though) feels a bit rushed to begin with but gradually settles down to steady the pace of the film.

Vidya Bagchi has now given way to Vidya Sinha (Vidya Balan), a young woman who displays courage and motherly love towards the young Minnie (Naisha Khanna), who’s subjected to trauma and confined to a wheelchair. And when Vidya meets with a car accident and is in a coma, sub-inspector Inderjeet Singh (Arjun Rampal) steps in. She’s mistaken for the wanted Durga Rani Singh, a kidnapper and cold-blooded murderer. Locating her personal diary, it’s a flashback to eight years ago as sub-inspector Singh attempts to unravel the truth behind her identity and the course of events leading to her accident. Being a suspense film, we’ll let the story rest here.

Balan, as the woman taking up cudgels to right a social wrong, or displaying unrequited love towards a young girl, is fabulous. Arjun Rampal as the bike-trotting, spruced-up cop is decent, while Naisha Khanna gives a restrained performance. Of the supporting cast, Kharaj Mukherjee as Rampal’s boss Haldar is admirable, while the scarcely seen Jugal Hansraj as the girl’s uncle is passable.

The film is not without some implausible moments, though. Soon after awakening from coma, Balan evades her pursuers and ventures out into the dead of the night. And the hired assassin volitionally leaving the job incomplete – oh, how one missed the smiling assassin Bob Biswas of Kahaani!

But with its dark undertones – the night shots, captivating background music, and Ghosh’s slick direction along with his tight-paced script – the film succeeds in making the Kalimpong and Kolkatta-based K2 a gripping and watchable film