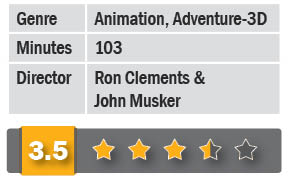 After having helmed ‘Aladdin’ and ‘The Little Mermaid’, directors Clements and Musker have taken their animation legacy further in ‘Moana’. A once sea-faring nomadic tribe has now established residence on the Motumui Island, in ancient Polynesia. Moana (voiced by Hawaiian debutante teenager Auli’l Cravalho) defies her tribal Chief father’s decree not to venture beyond the reefs of their South Pacific island. But the ocean, rewarding her for having saved a sea-creature, grants her safe passage. And so, our little princess, spurred on by her grandmother, sets off in search of the heart of the island goddess  Te Fiti — stolen a thousand years ago by the appearance-changing demigod Maui (voiced by Dwayne Johnson), a human who was raised by gods after being abandoned by his parents.

Garnished with folklore and mythology, it is a delightful sea-adventure with some short but captivating songs written by Lin-Manuel Miranda and composed by Mark Mancina, notably ‘Somewhere we are’ and ‘How far I’ll go’.

Most of this year’s animation films have been animal-based (Finding Dory, The Secret Life of Pets, Zootopia), and in ‘Moana’ too, we have the girl’s daft pet rooster Hei Hei, Pua the piglet and the ogrish crustacean.

Though the vibrant colours we saw in ‘Trolls’ are understandably absent in this Disney’s 56th animated feature, what packs a punch here is having a female protagonist as the navigator and her marine adventures in association with the indefatigable with Maui.  Also, what sets this film apart is the absence of a love interest while the opening scenes in the film with the cute and cuddly antics of the toddler Moana will simply steal your heart