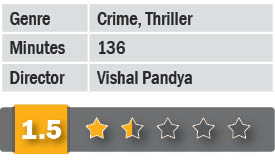 The title of the film has been taken from a song in ‘Hate Story-3’, which was also directed by Vishal Pandya. But that’s not the only liberty he has taken.  He has mutilated — ‘remixed’ being the official term in the industry — at least two iconic songs (‘Pal pal dil ke saath’ and ‘Aise na mujhe tum dekho’, both of the 70s), while a third ‘Maahi Ve’ does the Modi demonetization trick — appearing out of thin air.

Rahul Oberoi (Rajneish Duggal) is a media baron on whose Global Time Network TV channels a murder is streamed live.  Naturally the police not only conclude it’s a case of hacking but also hold Rahul the prime suspect.  His company legal head, Siya (Sana Khan) stands up to public prosecutor (and boyfriend) Ranvir (Gurmeet Choudhary) in court. And since the first of the murders committed live on TV is of ACP Ramesh Sarnaik, the case is handed over to smart cop ACP Kabir Deshmukh (Sharman Joshi). The case is solved but not before a couple of hours  in which two more murders are committed and at least 10 minutes are spent on a  power-point presentation on how a TV channel functions and the way hackers operate.

A convoluted script and some contrived dialogues dominate this two-hour plus film.  Every now and then, warped dialogues are attempted (yes, that would be the appropriate word) in English.  Sample: ‘logicless’ and ‘don’t shout on me’—Sana Khan gets the dubious distinction of mouthing both. Cinematographer Prakash Kutty earns his pay cheque by letting his camera linger, for more time than necessary, on cleavages and liplocks.  Each of the songs is forcibly thrust on the viewers.

Sana Khan, Gurmeet Choudhary and Rajneish Duggal badly need to brush up on their acting skills. Sharman Joshi is a misfit, besides getting to utter some corny dialogues about his ‘vardi ki shaan’. In the dying moments of the film comes the dialogue ‘Mere har gunaah ki wajah tum ho’. The final action sequences are the most ludicrous seen on screen in recent times — that is, if the viewer is still in the auditorium till then.