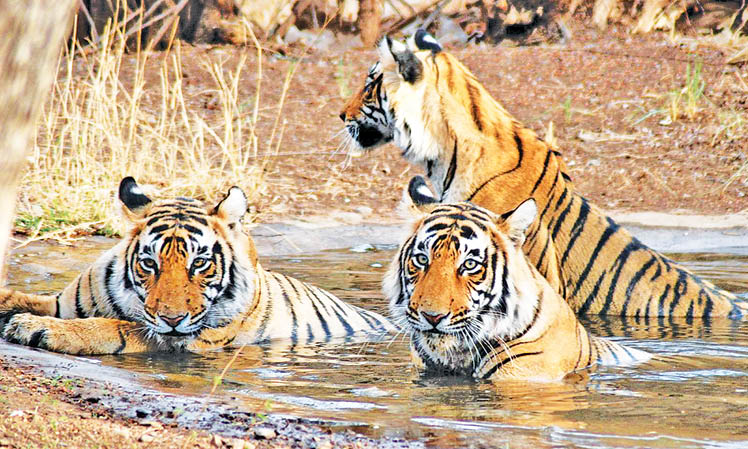 Jim Corbett National Park is one of the few national parks in India which allows night halts in the heart of the forest. For this, tourist complexes at Dhikala, Gairal and Bijrani are to be booked in advance. Jim Corbett Park, mainland Asia’s ﬁrst National Park, spans over 1318.54 sq. kms, of which 520 sq. kms is the main area and the remaining is the buffer area. In 1936, the Park was named Hailey National Park but later renamed Corbett National Park (after James Edward Corbett, the famous hunter turned conservationist). Subsequently, the Park came under Project Tiger in 1971 for its population of the Royal Bengal Tiger and has also been declared as an ‘lmportant Bird Area’ (IBA) by Birdlife International for its many bird varieties.

Comprising mainly marshy, riverine belts, grasslands and a large lake, the Park can be viewed in an open wheeler jeep or on elephant back. It shelters a healthy population of tigers, known to kill much larger animals like buffalos and even elephants for food! The call of the sambar is believed to be a good indicator of the presence of the predator! The Park has leopards in the hilly areas and a sizable population of jungle cats, ﬁshing cats and leopard cats.

For convenience, Corbett has been divided into different zones – The Bijrani Safari Zone, popular for its abundant natural beauty and open grasslands; the Jhirna Safari Zone, open for tourists round the year; the Dhela Safari Zone, a new ecotourism zone in tiger reserve zone popular for its wealthy ﬂora and fauna; the Dhikala Zone, the largest and most varied zone and is famous for its abundant natural beauty and a night stay here is not to be missed; and the Durga Devi Zone, a bird watchers’ paradise. The Sitabani Buffer Zone, although doesn’t fall under the Corbett Tiger Reserve area, is visited for its serene ambiance.

Rivers are the lifeline of wildlife and Corbett is fed by 3 of them — the Ramganga, the Kosi, and the Sonanadi. The Park remains open from the mid-November to midJune with some parts like the Jhirna Zone open round the year. Also, the Birjani zone is open from mid-October to midJune; and the Dhikala Zone from November 15 to mid-June. Interestingly, during monsoons the road of Dhikala and Birjani gets completely washed away. Do visit the Kaladhungi Museum which used to be the house of the legendary Jim Corbett, as also the museum at the Dhangarhi Gate, where you can get to see some of the preserved tiger, leopard and other wild animals. All visitors to Corbett National Park have to obtain permits.

Want to enjoy a game of cricket? A little away but surrounded by deep forest of Jim Corbett Park, matches are played on the ‘Turf’ pitch. For this please check on coaching camps who offer a facility of net practice on ‘Turf’ and cemented pitches.