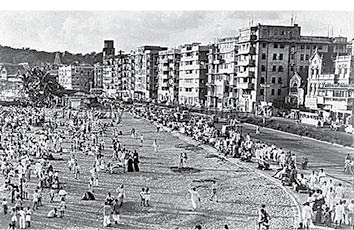 Chowpatty is really ‘Chau-pati’ meaning four channels, and is evidence of the inroad of the tide before the western foreshore as reclaimed. This name is analogous to that of Satpaty, a village in the Mahim Taluka of the Thana District, which is approached through a channel or khadi, containing seven pats or divisions of water! 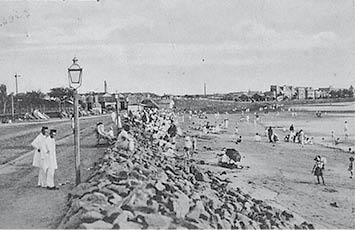 Colaba was derived from the word ‘Kolaba’- the name of the district which lies on the far side of the harbour, which in turn derived the name from Kolvan or Kolbhat, a koli hamlet or village – as the Kolis or fisher-folk undoubtedly settled here, as in other parts of the island since centuries. A certain research states that the name of the mainland district is taken from the Arabic word, ‘Kalabeh’, meaning a neck of land jutting into sea, a description which exactly fits Colaba. Dr. Jivanji Jamsetji Modi writes, ‘One remembers having heard when young, that Colaba meant the ‘ab’ (Persian term for water) of the Kolis.