Meherbai loved her hubby of 50 years very much and did her best to show her love on a daily basis. Theirs was a beautiful relationship wherein they gave each other gifts, red roses, perfumes and chocolates even if there was no occasion and specially if there was one! On New Year’s day, Meherbai cooked something navoo for the navoo varas. Last year, she made sweet potato and rosemary soup with garlic bread, golden-fried-crispy jumbo prawns, Jardaloo sali-margi and Anjeer ni Rabri. As a New Year present, this year, Meherbai wanted some unusual present for her ‘Mehello’, so she went from mall to mall and from shop to shop and finally decided on a Modi Jacket! 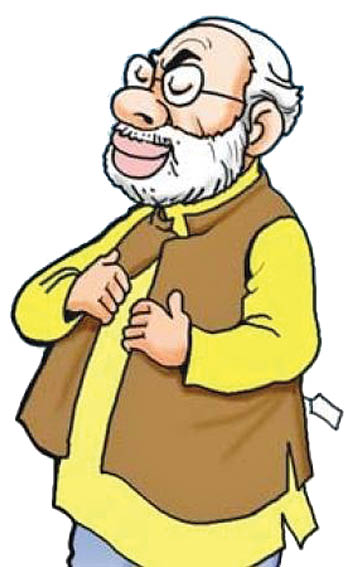 “Surprise!! And a Happy New Year my Janoo.” She said, handing over the gift to Meherwanji after lunch, when he is always in a good mood. He tore the satin-ribbon bow and the silver gift-wrapped paper. He was confused and asked: What is this? A monkey-jacket? Do I look like a Matheran no Vandro to you? “

“But there are only two persons in India who look dashing in a Modi Jacket. One is Mr. Modi himself and second is Mr. Khojeste Mistree; though strictly speaking, what Khojeste wears is a sort of a vest and not a jacket. “No No!” said Meherwanji, “I’ll look ridiculous like a madari no vandro dancing to the beat of a doog-doog-yu!”

“Nonsense! You’ll look distinguished. We will go to NCPA concerts when you wear it and you will look much smarter than the other men, who in any case look ridiculous in their bush-shirts. Vicaji Vaghmaru looks like a letter-box in his red satin bush-shirt whereas that Hoshang Hypochondriac looks like a Hanging-garden in his floral bush-shirt. Minoo Makori looks like a margi-nu-pillu (tiny chick) in his yellow T-shirt! No dress sense! These Bawas!”

“What about that smart and handsome Bomi in his safari-suit?”

“What safari-suit? It looks like a baba-suit which toddlers wear! Besides, he wears the same melo-ghelo, shape-shaap-vagarno dirty and ill-fitting baba-suit in the mornings to the Grant Road Bazar and to every Natak, Cinema, Lagans, Navjotes, Funerals and Uthamnas! Only his bib is missing since he dribbles – a complete hojgaru, if ever there was one!”

Just then, their busy-body neighbour, Aloo rang the doorbell and the man of the house answered the door, since opening the doors whole day was his duty.

“Its’ a Modi jacket, you moron” said Meherbai, the most loyal wife. You see, Meherbai could say anything to Merwanji, like stupid, idiot, gaado, ghelo, junglee, chakram, mai-no-margho, etc. whenever she was angry. But no one else in the world dare say anything to him. Not even a word. She would come to her hubby’s defence and fight on his behalf like a tigress! (See the advantage of marrying a Parsi woman!)

Aloo retorted: “A Modi jacket looks nice on a fifty-six inches chest i.e. on a convex chest but poor Merwanji’s 30 inches chest is concave, like a cake that has collapsed in the oven.” Just then, Aloo’s twin sister Jaloo walked-in and said, “Merwanji, you need a Sheriff-badge pinned on your chest, a good horse from Bandstand and a cowboy hat – you’ll look exactly like Clint Eastwood in a Western movie. Remember, A Fistfull of Dollars? A few Dollars more? Dirty Harry?”

Its’ a Modi Jacket, you ignorant woman.” said Meherbai, “and it’s taken the fashion industry by storm.”

“Meherbai, it looks good on the Prime Minister but not on ordinary people like us… It can’t look good on a farmer because there’s not too much of him to fill the jacket.  It can’t look good on an industrialist because there’s too much of him and too little of the jacket! It doesn’t look on some women who wear it over a blouse. It can’t be worn by the common man because you need to wear something under the jacket and with inflation and demonetization, only one garment at a time can be worn! Two garments can be expensive! Modi Jacket is for a Raja – not his Janta, and certainly not Meherwanji.”

By now, Meherwanji was totally embarrassed. He took out the jacket and flung it on the sofa. The busybody neighbours, Jaloo and Aloo went shopping since Aloo had to buy aloos (potatoes) and Jaloo had to buy jardaloos, for the pullow they were making for the New Year’s lunch that day.

By now, the clever reader must have guessed that Meherbai was very upset. Rejection of New Year’s present meant rejection of love for her and she gave that special ‘silent-treatment’ to her bitter-half who was reading Parsi Times. Suddenly, Meherwanji saw the PM’s photo in Parsi Times under the heading ‘Caption This’, and ran to the kitchen to show it to his bitter-half, “Look, Jo! Jo! PM per Nehru Jacket ketlu smart lagej!”

Meherbai got more angry like a pressure cooker about to explode and collected some forks and spoons apparently to throw around. Clever Merwanji took away the cooker from the kitchen-shelf and wore it on his head to avoid any injury on New Year’s Day!