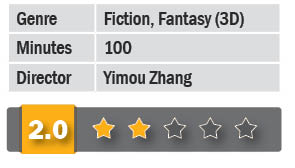 It’s the stuff legends are made of. Though the origins of the Great Wall of China can be traced to prehistoric times, its main portions were erected barely five to six centuries ago to defend against human invaders. Veteran director Yimou Zhang, best known for directing the opening and closing ceremonies of the 2008 Beijing Olympic Games has helmed the USD 140 million ‘The Great Wall’ – reportedly the most expensive film shot entirely in China.

In this film, the viewer is informed that the historic Wall was erected to keep out the spooky, monstrous dragon-like creatures (Taoties) which would creep up the wall to devour humans once every 60 years. William, played by Matt Damon and Tovar – Pedro Pascal – are two survivors of a group hunting for the fabled black powder (gunpowder) in northern China (Gobi Desert). William fortuitously manages to sever the hand of a Taotie before being captured by the members of the Nameless Order. The Order’s various combat units are all under General Shao (Zhang Hanyu) who spares the foreigners’ lives when they display the giant chopped hand. General Shao falls to the marauding monsters, but not before handing over the reigns to his comely English-speaking Commander Lin (a very wooden Jing Tian). After Lin delivers a sermon on trust to William, the two join forces to combat the carnivorous Taoties.

Smart editing by Mary Jo Markey and Craig Wood fails to raise the bar for this film despite the presence of Hollywood A-lister Damon. Most of the characters go through their paces as if in the knowledge that the CGI effects and SFX backroom guys would take care of the finishing touches. Willem Dafoe as Ballard, in captivity for 25 years and who has taught Lin English, is wasted in a minor role. And as far as the Chinese requiring the intervention of westerners to combat their foes – that’s probably another legend.