Sarosh Baria is an instructor in the science of Astronomy and sky-watching since 1997. He teaches and lectures school students, families and corporates about the night-sky with the help of astronomical grade telescopes. A teacher by qualification, he is a life member of the Amateur Astronomers’ Association (AAA) in Bombay, and has travelled to several locations across India to learn and teach about the wonders of the night sky. In a world, where virtuality seems to be taking over reality, where our gen-next is unable and unwilling to see a few inches beyond gaming consoles and mobile phones, Sarosh lures us into stepping into the real, magical world of stars in the night-sky… light years away! 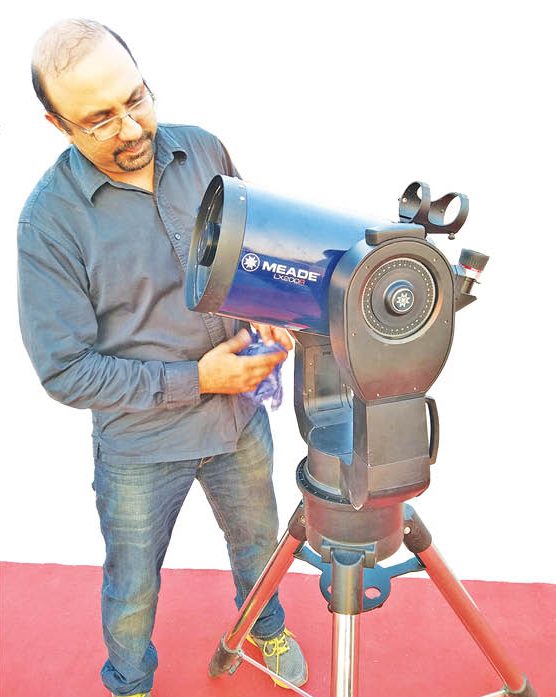 In spite of man’s ever busy and hectic pace of life today, there are those who take the time to gaze into the skies and ponder in amazement at its vastness and mysteries. Questions like ‘What is out there? Who are we? Where do we come from and why is the universe here?’ still remain unanswered…

Prehistoric man must have wondered about the thousands of shining points of light in the sky at night, the sun, the moon and the planets. Even though he had no clue and derived no answers, he laid the seeds for the birth of the oldest natural science known to man—Astronomy or the study of objects in the sky. People in Africa and Europe began keeping records of the moon from as far back as 35,000 BC! Since 8000 BC, Greek, Arab, Mesopotamian, Aztecs, Mayan, Indian and Chinese astronomers made star maps, and traced the paths of planets. Our modern day calendars are based on the measurement of the motion of various objects in the sky.

In the 21st century, our understanding of the laws of the universe has taken a tremendous leap forward with the help of the powerful telescopes. Satellites have toured the Solar System and some have landed on certain planets, asteroids and comets, while others have sailed beyond the orbit of Pluto! We have gazed at the borders of the visible universe with the Hubble Space Telescope and have discovered over 4000 new planets! What is common to all the astronomy enthusiasts was their undying spirit of inquiry and thirst to answer questions that are fundamental to our existence and the origin of the universe.

Today, information in astronomy obtained over thousands of years of research, is available on the internet at a click of a button. Truly, our worries about education, career, marriage, family and eventual retirement rules our life. Children today are inundated with regimented exams, tuitions, sports and hobby classes. All hobbies are great, but the eyes of man, both young and old are set firmly like blinders to mundane and serious events on Earth; forgetting that she is a tiny part of a very vast universe — a universe that still holds unsolved mysteries and wonders… as W H Davies said in his poem, ‘Leisure’, that man has no time to stand and stare….

Astronomy can be enjoyed by anyone irrespective of age or financial status. Even today, when I pitch a telescope, people and children flock to take a peek through it. Their jaws drop when they see the craters on the moon, the rings girdling Saturn, Jupiter accompanied by its satellites or a cluster of stars light-years away. They have dozens of questions. Some people in their eighties have never seen through a telescope! Even today, in spite of a hundred distractions, people are fascinated by astronomy articles published online, a book on the subject or the chance to peer through a telescope. But why? I believe that there is something fundamental in the intellectual DNA of every human that fascinates him with astronomy.

What the child is doing is going beyond the realms of the school textbook and engaging in inquiry. This science gets children to put aside gaming consoles, cell phones and encourages them to head out into the open and wonder at the night sky; just like people have over 37,000 years ago. Don’t worry. You do not at once need to reach distant locations such as Bordi or Alibaug with a telescope costing tens of thousands of rupees.  Nor do you not need a Ph.D in Astronomy or Astrophysics. Just the naked eyes will suffice for starters. Go out and enjoy it before the haze of city lights drowns them all. Spend some peaceful and magical time observing the night sky, while lying down on the grass. See what puzzled the caveman and gaze at what Galileo and Isaac Newton pondered over. Ask questions. Who knows, you may find the answers to the nature of the universe and our place in it!

View all posts by Sarosh Baria →