Well, it all began when my Editor friend called me and said she wanted something very different for PT’s Jamshedi Navroz Special issue. She was quite explicit that the content should be exclusive and not covered in the Indian motorcycle scenario in the present and past. Not to go back on my word, I scoured my memory and the net for some forgotten gems of the motorcycle world and resurfaced with the Imme, Megola, Verdel, Majestic and Böhmerland. At the outset, I confess even I hadn’t ever heard of a ‘Majestic’ and have taken the omnipotent support of the net to complete this story. So here goes… 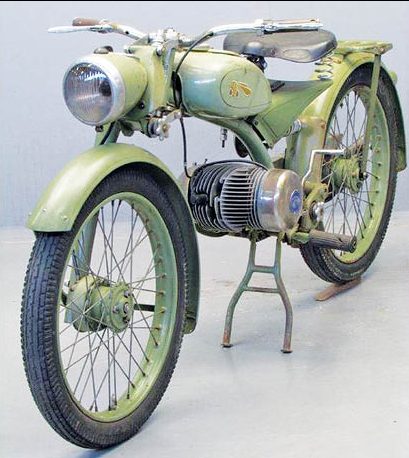 Manufactured by a German company called Ridel AG, the 100cc two-stroke Imme R100 was built from 1948-51. The engine made a humble 4.5 bhp @ 5,800 rpm. One look at the bike and you could see that it was clearly ahead of its times. On the lines of the design elements seen 40 years later, on a Bimota Tesi and Yamaha GTS, the Imme featured a single-sided front fork. To match it, it also had a single-sided rear swingarm (which also functioned as an exhaust system) and a cantilever rear suspension. The front and rear wheels were interchangeable too.

To up the oddity quotient, the Imme’s egg-shaped engine was geared with a three speed, without any neutral! A mechanism held the clutch when the motorcycle was at idle in first gear. Further, the first gear was positioned in the middle of the shift pattern, with second gear below and third gear above. It is believed that 12,000 such pieces were made, but only around 20 known Immes exist in Germany today. 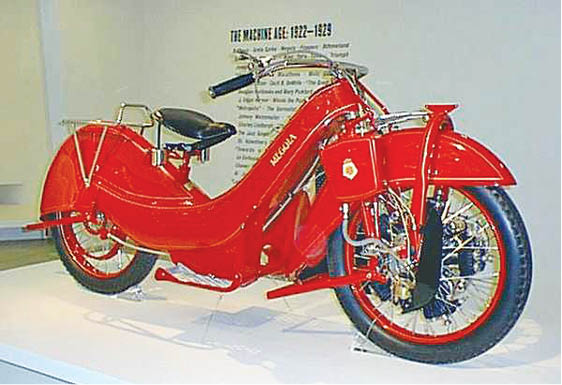 This one would easily qualify as one of the weirdest looking and functioning bikes ever built. Made in Germany from 1921-25, the Megola had one of the most non-standard powertrains ever offered in a motorcycle. Its 640cc 14 bhp @ 4000 rpm, five cylinder air-cooled, side-valve ‘radial’ four stroke engine was mounted directly at the front wheel, eliminating the need for clutch and gearbox. Literally, an engine on wheels! The carburetor was mounted on the fork adjacent to the engine. It had a fuel tank in the riveted and welded monocoque frame, but that acted as a reserve – fuel had to pumped into a smaller tank mounted above the carburetor on the front fork for operation. With a center stand at the front wheel, the bike could be started by spinning the front wheel and idle in place, or with the wheel down, the rider could simply bump start it and be off. There was no front brake, but it featured a dual rear brake system!

The Megola was actually competitive in racing and won the 1924 German Championship, beating many a BMWs! It is believed that the racing versions could top 140+ km/h with excellent handling. Out of the 2000 built, only 10 survive.

This particular Verdel is supposed to be built in 1912. All documentation has been lost on the bike because Verdel’s business in both, World War I and II, was in the firing line. This French built machine had a 750cc five-cylinder ‘radial’ engine, typically used in the aircraft industry. The Verdel had aluminum cylinders with overhead valves, an advanced type of engine for its times. A single side-float carburetor was sitting to the right of the block where five pipes fed fuel mixture into the cylinder lead. This 750 cc engine made approx. 35 bhp. With only one motorcycle left in the world, not much is known about this bike. 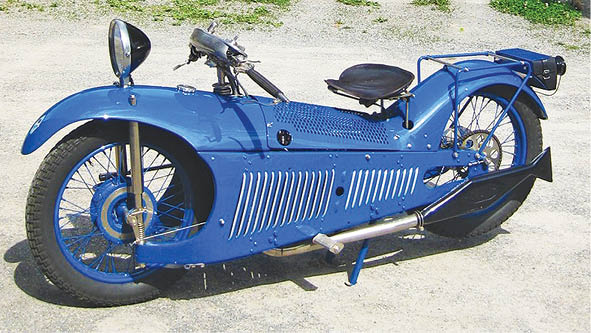 The Majestic was built by a French manufacturer between 1929 and 1933. It pushed the boundaries of styling with its streamlined body and an automotive style chassis. Made in multiple engine configurations, from 350cc, 500cc all the way to 1000cc, the Majestic was made with sheet metal carcass and a pressed steel chassis for better weather protection for the engine and the rider. This car-on-two-wheels design also featured a hub-centre steering via links and rods, like the earlier Ner-a-Car. The entire machine, barring the engine, is unique and aspired to be a motorcycling’s comfortable and a stylish tourer.

Only around 100 were produced and very few known examples remain.

Made in Czechoslovakia from 1924-39, the Böhmerland was an oddity then, just as it is today. This extremely long tube-frame chassis had leading-link front forks, and solid cast aluminium wheels – an industry first, until the 1970s. All three wheels including the sidecar were interchangeable. The OHV single-cylinder engines were 600 cc. All of them had dual bullet shaped fuel tanks in the rear, and some had a third tank in the traditional location. The chassis surely was the earliest perimeter frames to wrap around the outside of the motor.

The Böhmerland was produced in several wheelbases; a two, three and even a four seat model. An experimental machine was built for the military which seated four soldiers, and used two gearboxes, with the rear operated by a passenger, giving nine ratios. The four seat model had the longest wheelbase of any production motorcycle, a whopping 3.2 meters. What a gigantic turning radius this bike would have had!

Close to a thousand machines were made, and a few still ply on the roads today.

All of these oddly beautiful motorcycles were differently ahead of their time, but a personal favourite of the featured five is the little Imme!