The Annual General Meeting and the Executive Council Meeting of the Federation of the Parsi Zoroastrian Anjumans of India was hosted and organized by the BPP on 29th and 30th of April 2017 at the Banaji Atash Behram Hall. 38 Anjumans from all over India participated in this meeting – including Agra, Ahmedabad, Badnera-Amravati, Bardoli, Belgaum, Bharuch, Bilimora, BPP, Borivali & Suburban Zoroastrian Association, Chikhli, Davier, Delhi, Dahanu, Dumas, Gandevi, Illav, Iranian Zoroastrian Anjuman, Jhansi, Khergam, Mhow, Mahuva, Mandvi-Mangrole, Nargol, Nagpur, Navsari, Pardi, Poona, Panchgani, Ratlam, Sholapur, Saronda, Surat, Tavdi, Thana, Vadodara, Valsad, Vansda and Vyara. It was heartening to have Poona and Agra attending after a gap of a few years.

In keeping with tradition, a Jashan was performed at the Banaji Atash Behram Main Hall before the official meeting commenced. What made this meeting special was its focus on getting work done, the positive achievements and not just dwelling on the problems that Anjumans face. The Meeting commenced at 10:30 a.m. with a Hum Bandagi led by Er. Yazdi Panthaki of Saronda. One minute’s silence was observed to honour the memory of Vada Dasturji Peshotan Mirza Saheb of Udvada, former BPP Trustee Dadi Engineer and Trustee of Saronda, Sarosh Poonawalla.

After all the delegates introduced themselves, items dealing with statutory compliance were taken up – minutes of the previous meeting were passed, the Budget was adopted, and Statutory Auditors approved.

Elections of Office Bearers of FPZAI

Every 2 years there is an election to the various posts on the Executive Council of the FPZAI. The Chairman of the BPP, Yazdi Desai continues as President of FPZAI.

All the Anjumans are divided into 5 Zones based on their locations in India. Each Zone is headed by a Vice President (VP):

From among the Executive Council members 2 Hon. Secretaries, 2 Hon. Treasurers and One Executive Secretary are appointed, as under: 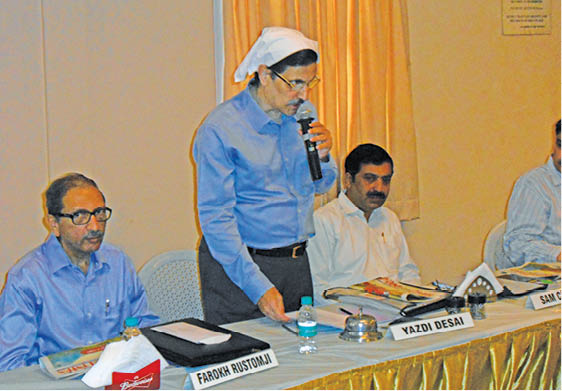 A sub-committee formed under the stewardship of Bomi Hirjee of Indore and comprising Farrokh Rustomji and Khurshed Pastakia of Borivli, to amend the Memorandum and Rules & Regulations of FPZAI, came up with the amended draft of the Memorandum and Rules & Regulations at the last meeting in April 2016. All the suggestions given at the 2016 meeting were incorporated and the redrafted document was sent to all the Anjumans. At this meeting, Farrokh Rustomji chaired this session. After meticulously going through every clause of the amended and re-drafted document, it was passed by the delegates.

Sam Chothia, CEO of the Defunct Anjuman Committee (DAC) presented a Report on the work done by the Committee.

This was the highlight of the Meeting. Sam Chothia took over the reins of the Defunct Anjuman Committee from Soli Katpitia who had headed it for more than 30 years – with little or no tangible results.

Sam Chothia in the last year has visited more than 12 Defunct Anjumans all over India. The visits and interactions with the locals bore fruit. For the first time in the history of the Federation, one Anjuman – Neemuch Anjuman of Madhya Pradesh – expressed confidence in the integrity and leadership of the new FPZAI team and handed over the entire control of its administration and properties to the Federation. Two other Anjumans (Gandevi and Vesu) also expressed their willingness to hand over the control and administration of their Anjumans to the Federation.

Also for the first time, a property of Dharwar Anjuman was sought to be sold with the full house approving of the sale. The entire process was carried out following the guidelines adopted by the Defunct Anjuman Committee. 90% of the proceeds from this Sale will go to the Federation. Sam Chothia presented his Report with Power Point slides containing photos of places he had visited.

Presentation by Vyara Songhad Anjuman on their Baval Project by Percy Buhariwalla, Trustee and Rustom Vakil Trustee of the Sethna Trust

Vyara Songhad, an Anjuman near Navsari has 8 acres Doongerwadi land which was in danger of being encroached upon. To safeguard the land and utilize the land for the benefit of the community, the Anjuman partnered with the Framji Hormusji Sethna & the Maneckji Framji Sethna Trust through the active participation and encouragement of their Trustee Rustom Vakil to grow Baval trees. The wood of the Baval trees is used as kathi for our Fire temples. Incidentally 700 metric tonnes are required by all our agiaries per year and this project will supply 70 metric tonnes.

2500 baval trees were planted on 5 acres of the Doongerwadi lands. Rustom Vakil donated Rs 28 lakhs through his Trust to the Vyara Anjuman for constructing a wall around its Doongerwadi lands (which was the major cost), fencing, leveling the land, drip irrigation and planting the trees. Rustom Vakil also stated that his Trust would be donating for annual maintenance of the Project. Rustom Vakil then enlightened the delegates on this joint venture between his Trust and the Vyara Anjuman and invited other Anjumans to partner with him to grow baval which would be used not only in their own Agiaries but also other agiaries all over India and at the same time help protect their lands from encroachment.

There were presentations by Pearl Mistry of JIYO Parsi and HPY. Both encouraged more participation from the moffusil anjumans in their programmes.

Commodore Bhada enlightened the delegates about the questionnaire which was posted by the Government in its website, inviting responses regarding the proposed Uniform Civil Code from all communities. He cautioned that anyone can post their responses and if the Federation or BPP has not responded on behalf of the community then any person or group could respond and it could be taken as the community’s response, in the absence of an official response. He stated that our ethnic and religious identity would be affected by the Uniform Civil Code as it dealt with all aspects including adoption, marriage and divorce etc. It was discussed and resolved by a show of hands (which was unanimous) that a letter would be drafted and sent on behalf of the Federation stating that the Parsi community would like to be exempted from the Uniform Civil Code due to our unique circumstances.

Arising from this debate, Comm. Bhada stated that the community should have a strong orthodox person as a Parsi member on the National Commission of Minorities, especially when issues such as the Uniform Civil Code were being debated at Government level. Most of the delegates agreed to this and expressed concern if a reformist was appointed to this influential post. Delegates asked who and how a person was selected for the post and it was suggested that the Federation propose a few names for the post. A delegate stated that already the appointment was near finalized and that the person was  Dinshaw Tamboly. Another delegate inquired of Yazdi Desai if the BPP had nominated Tamboly. He said Yes. Most of the delegates were stunned, including the 2 BPP Trustees who said that they were unaware of this recommendation. Yazdi Desai apologised to them for the manner in which it was done and explained the circumstances that had prompted him to hurriedly give the recommendation to the Ministry.

All the Anjumans then turn by turn informed the House of the details of their Anjumans with special emphasis on their properties, number of residents, their peculiar problems and significant achievements in the past year.

The 2-day meeting ended with all looking forward to the next meeting on 24th September 2017 in Ahmedabad.