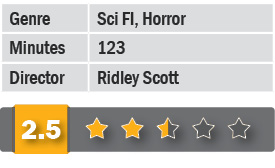 Take an eerie-looking spacecraft (Covenant) hurtling through space towards planet Oregai–6, 15 crew aboard in hyper-sleep along with the 2000 passengers out to colonize a planet, add some of the ghastliest, bloodthirsty creatures — with bloodcurdling screams — designed by VFX specialists, and you have Alien: Covenant.

A solar flare results in a series of malfunctions and awakens the crew: the captain is charred to death, leaving Oram (Billy Crudup) in charge. Some of the other team members are Tennessee (Danny McBride), Daniels (Katherine Waterston) and the Android Walter (Michael Fassbender).

Responding to frequency signals, Oram pilots the craft to an unmapped planet which is seemingly fit for human existence — bringing a sense of tranquility to the proceedings. Director Scott takes advantage of this lull (a planet ‘without birds or animals’) to unleash on the unsuspecting viewer some horrendous and gruesome VFX-aided creatures who bring brutal and spine-chilling deaths to the unwary humans.

A prequel to Alien and a sequel to Prometheus, Alien: Covenant rides mostly on the experience of Scott and the brilliance of Fassbender; not to mention the cinematography of Dariusz Wolsky and the wizardry of the special effects team. But the back-story could have been more well-defined: characters are not properly introduced, save for Prometheus survivor David (Fassbender again).

A final word: sequels don’t mandatorily have to be made — let the originals be an abiding memory.