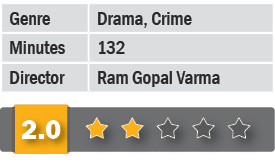 Forget Dharmatma; forget Dayavan. Sarkar 3 is the closest to The Godfather you’ll get to see — in terms of dialogues, the sepia-coloured frames, the subplots, or even the grating and rasping voice of the Don (one could be forgiven for wondering whether subtitles would be needed).

The Bal Thakarey inspired character Subhash Nagre’s (Amitabh Bachchan) eponymous Sarkar — rudraksh maalas, flowing robes, et al — is once again brought to screen by Ram Gopal Varma. Rewriting the rules of political complexity in our country doesn’t take much, as is shown by Nagre’s extra-constitutional authority and wield over the masses.

Undercurrents of treachery and power-games are brought to the fore, even without his two deceased sons Shankar (Abhishek B) – whose framed photo conspicuously adorns the wall, and Vishnu (Kay Kay Menon). Adding a twist to the proceedings are his estranged grandson Shivaji aka Chiku (Amit Sadh) and his trusted lieutenant Gokul (Ronit Roy). Rounding off the cast are Yami Gautam as Annu – Chiku’s love interest and whose father was bumped off by Sarkar, Jackie Shroff as Dubai-based billionaire Michael Vallya (sounding suspiciously like the absconding liquor baron), Manoj Bajpayee as rival aspiring politician Govind Deshpande, Rohini Hattangadi as the latter’s mother, and Supriya Pathak as Sarkar’s wife.

Of late, Varma’s films have eschewed substance and even style; and in Sarkar 3, the main twist can be spotted even before the interval. Sarkar’s household is dark and gloomy, almost dreary; his principles, though, are anything but. While in The Godfather we had the Don refusing to help his rivals in the drug business; in Sarkar, Nagre refuses as 15000 slum-dwellers would be displaced.

Manoj Bajpayee shines in his limited screen time. And all Yami Gautam does is try to look appealing and menacing – both at the same time. The background score with the ‘Govinda’ refrain is tolerable up to an extent. While the film’s dialogues are predictable and hackneyed, Jackie Shroff’s mere presence on the screen evokes unintended guffaws. It’s Amitabh’s film all the way, and his grip on the Sarkar films is evident. While Coppola had the courage to finish off Brando in the first Godfather instalment itself – relying on Pacino to complete the trilogy, Varma has relied resolutely on Bachchan for all the three films.

A title card at the beginning of the film readies us for the ensuing couple of hours, with the words “Power does not come from fear; it comes from respect.”… Our respect for Ram Gopal Varma, it seems, is gradually being eroded.