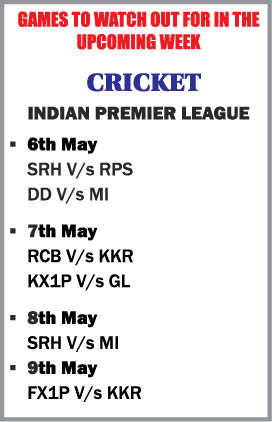 Rahul Tripathi Stars As RPS Beat KKR: Rahul Tripathi’s massive 93 off 52 balls, with 9 fours and 7 sixes, helped RPS win by 4 wickets against rivals KKR in their own home den at the Eden Gardens in Kolkata. Batting first KKR notched up 155-8 in their 20 overs. Manish Pandey top scored with 37. Suryakumar Yadav remained not out on 30 of 16 deliveries. For Pune, Jaydev Unadkat and Washington Sundar picked 2 wickets each. In reply, Pune comfortably hit 158-6 in 19.2 overs, courtesy Rahul’s great knock. KKR’s Chris Woakes was the pick of the bowlers finishing with 3-18 in his 4 overs. Rahul Tripathi was Man of the Match.

Delhi Beat Sunrisers Hyderabad: Delhi defeated the Sunrisers Hyderabad by 6 wickets thanks to Corey Anderson’s unbeaten knock of 41. SRH put up 185-3 in 20 overs as Yuvraj smashed an unbeaten 70 off 41 deliveries. Mohammed Shami scalped 2-36 in 4 overs. Delhi cruised to victory with 189-4 in 19.1 overs. Shami was declared Man of the Match.