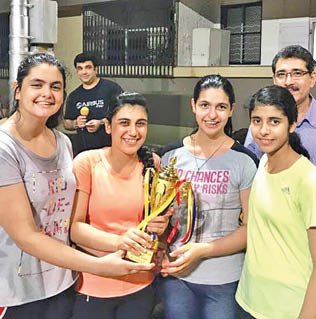 The Tata Housing Sports Club organised a Volleyball and Throwball tournament from 1st to 7th May, 2017. Sponsored by WZO Trusts, over 12 Throwball teams and 15 Volleyball teams participated, with the finale witnessing Chief Guest, Baji Sepoy – MD of Japanese Investment Banking Institution, Nomura Bank – felicitating the winners of Volleyball, ‘DPCSWA’ with a trophy in memory of Late Sorabji Siganporia, and Champions of Throwball, Malcolm Baug ‘A’ team, with a trophy in memory of Late Fali Pithawalla. Godrej Baug were the Runners Up Team for Volleyball, while Malcolm Baug ‘B’ grabbed the Runners Up title in Throwball. Vahishta Bharucha was declared ‘Best Throwball Player’, and Darayus Mehta won the ‘Best Volleyball Player’. Tushna Batliwalla, Freya Irani and Khushnaz Kasad were recognised as the ‘Upcoming Talent in Throwball’. The event concluded with a vote of thanks to THSC organising committee and the WZO Trusts and its head, Dinshaw Tamboly, who is an ardent supporter of sports.