Yazdi Desai, Chairman, BPP, updates the community about the ongoings in the BPP, with Parsi Times’ exclusive column, BPP Connect.

It is a testimony to the humaneness of my colleague Trustees – Kersi, Noshir and Zarir – that community members in desperate need of housing come personally and plead their case before the trustees knowing fully well that this Board will relieve them of their anguish. In this regard seven applicants have been allotted houses in the last one month by the Board. All of the applicants were truly deserving and in desperate need of housing. One of the applicants was a senior citizen couple physically abused by their mentally disturbed son, who were forced to separate from him. Another is a cancer patient from Dahanu whose leg has been amputated and requires treatment in Mumbai. Another is a widowed lady living in L&L accommodation, forced to move every 11 months. Another who was staying in very old premises and the landlord had asked them to vacate. And one newly married couple staying on L&L basis with 40% of their Salary going towards rent.

I reiterate that to the best of my knowledge and belief, no previous BPP Board has been as responsive to the plight of the needy as the current Board. Till date this Board has allotted 95 flats to the deserving members of our community.

As the community is aware, there was a campaign launched against the increase in Service Charges in BPP Colonies. The campaign was mainly orchestrated by a few persons claiming to be representatives of their respective Baugs/Colonies. However these persons have all been exposed by their respective Associations/residents as persons politically motivated and/or representing their own selfish interests – all of these 5 are able to pay but not willing to pay.

Till date, 73% of 2748 BPP flats have paid the increased Service Charges and I would like to acknowledge the singular contribution of my colleague Trustee Kersi Randeria who has convinced many colonies like Khareghat, Gamadia and many other Baugs to contribute to the expenses of the BPP. Also I would like to acknowledge Godrej Baug (Farhad Hozdar, Shahrukh Billimoria and Arzan Ghadiali), Captain Colony (Rayomand Sabawalla, Zubin Gandhi and Hormazd Bhamgara) and Bharucha Baug Multistoreyed Building (Feroze Karkaria) who have kept the overall good of the BPP and the community in mind and extended their utmost co-operation to the BPP in this matter.

Hats off to residents of colonies and especially stand-alone buildings, who have paid the increase without a murmur of protest, even though they may not be having many amenities that some colonies are fortunate to have. They really do have the good of the BPP and community at heart.

What to do if you are staying in any Colony / Baug and wish to report a leaking pipe or a malfunctioning streetlight or an overflowing gutter or garbage not being collected or sweeper not cleaning your building staircase or the flower bed not being weeded, or the branch of a tree coming close to your window ?

You need to do the following:

Every Baug /Colony has a Manager who is also known as a custodian. Some big colonies have 2 custodians. Every custodian at the colony/ Baug office has an Official Complaint Book. You need to write your complaint in the book with the date and time of the complaint. If you do not do so, then it is very difficult for the BPP administration to check the response time taken by the custodian to address your complaint. The custodian then co-ordinates with the Engineering and Maintenance Department who send the required plumber, carpenter, handyman to tackle the problem and /or pulls up the errant staff. The custodian also co-ordinates with the Union and the employers to improve the level of services to the Baug by giving feedback on the performance of the Class IV staff under him, with special emphasis on absentism and complaints by residents.

At our recently held BPP Jashan, we gave the Chairman’s Award of Rs 50,000/- to Neville Malegamwalla, for his dedication and commitment. Neville Malegamwalla is a custodian who is doing more than what is expected of him and this acknowledgement and appreciation was sent to the BPP in writing from the residents of the Khan Estate in Mahim of which he is the custodian. Neville keeps the Class IV workers in check, demanding and taking work from them. He moves around the two colonies under his charge, conducting surprise checks on the workers. He immediately reports to the Administration, any illegal or wrong being done such as structural changes in a flat being renovated etc. Ever vigilant and alert, he sometimes even comes at 2 am to check on the watchmen and deducts their one day salary if the gates are unmanned! This level of commitment is applauded and rewarded by our Board. And the residents and custodians of our colonies need to team up to improve services provided. 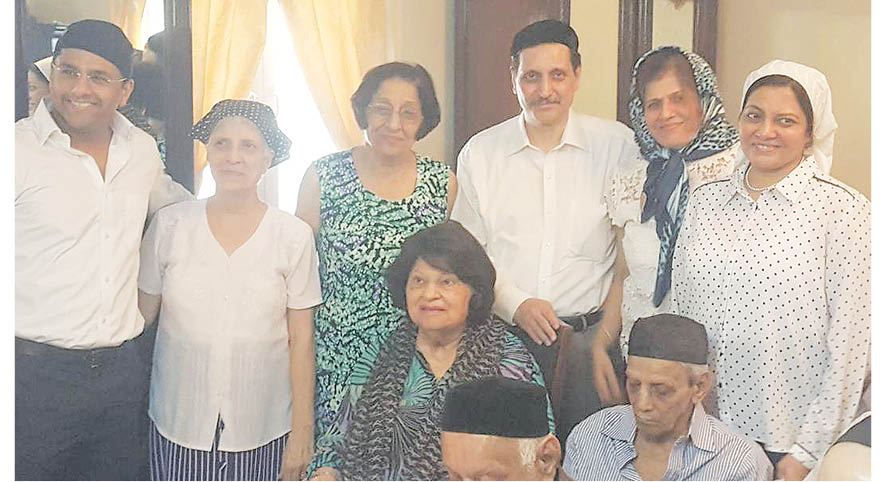 The Ahura Support Residential Home has been developed by the Ahura Support Trust at the Dossibai Home in the Masina Hospital Complex. This is a residential facility for community members with Special needs. Representatives of Ahura Support – Dr. Vispi Jokhi, Hutoxi Doodhwalla and Cyrus Bugwadia met the BPP Trustees on 25th April 2017 with regard to the Residential Facility for Children with Special Needs started by them at Dossibai Home. They informed that they have taken up the said project and wanted BPP’s help in this matter.

The Representatives informed that at present arrangements for accommodating 18 persons (50% male and 50% female) is available. There are 4 dormitories for 4 persons each and 2 special beds.   Each child before admission will be thoroughly assessed. Presently there are two residents. But what is proving to be a stumbling block is the high monthly cost per child of approximately Rs.30,000/-, which many of the parents cannot afford. Hence, they requested that BPP should atleast sponsor 5 children or give a onetime corpus amount for this.

The Trustees informed that they were in full support of the project. The Ahura Support Residential Facility needs to be supported to the maximum by the BPP and it would be ideal if money received by the BPP for a few flats auctioned on Refundable Security Deposit basis, be earmarked for this project.

There are 2 jewels in the BPP crown – one is the Holiday Programme for Youth (HPY) which is run for a full one month in summer for students who have finished their 10th Std exams, and the other is Parakh Dharamshala, the Home for the Aged run by the BPP.

Parakh Dharamshala is situated at Khareghat Colony and at the moment is home to 38 males and 34 female residents. A Ladies Committee headed by Arnavaz Mistry and consisting of Armaity Tirandaz, Zarine Chothia, Zenobia Adajania, Zarine Havewalla, Mahrukh Noble, Pervin Shroff and Baktatavar Tarapore oversee the running of the Home. The Ladies Committee meet every Monday and chalk out programmes for the residents, bring donations, decide on the repairs and maintenance of the premises, and generally oversee the running of the Dharamshala.

Every year the Ladies Committee organizes a Jashan in Dae Mahino, wherein the Trustees of the BPP are invited and they attend the function and interact with the residents. This year the jashan was held on Monday 29th May 2017.

The expenses for running the Dharamshala per year on an average is Rs. 75 lakhs. This is net of the recoveries received from residents who pay for their stay, donations and interest. To many of the Parsi / Irani residents, Parakh Dharamshala is their home in the twilight years of their lives. And as the BPP, we are grateful to the Ladies Committee for ably providing this facility.

This year three Parsi boys demolished the perception that in our community our girls are the achievers, leaving our boys far behind. The BPP Board heartily congratulates Farzan Bharucha for standing first in Mumbai in the ICSE exams scoring an unimaginable 99.2%.

Our hearty congratulations to Behram Baug boy Husrav Sadri for scoring a stupendous 98.5%, and standing 3rd in all of Maharashtra in the ISC (Class 12), Science stream. Both of these brilliant boys will be awarded Rs. 61,000 by the BPP.

The BPP is extremely proud of 14 year old Taronish Chothia (grandson of Khorshed Meherjee of Gamadia Colony) for being awarded “Chief Scouts Award”, which is the highest award anyone can get at the Scouts Level, in Scouts Canada.