It’s not just the title that is alliterative: with bounteous babes, bullets and Biharis– though not necessarily in that order– in good measure, Kushan Nandy’s ‘Babumoshai Bandookbaaz’ can lay claim to being a tolerably worthy, albeit milder successor to Anurag Kashyap’s 2012 ‘Gangs of Wasseypur’. 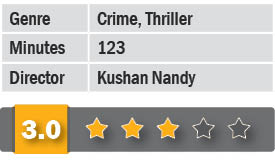 Contract killer Babu Bihari (Nawazuddin Siddiqui) has no compunctions about killing anybody, if the price is right. During the course of fulfilling one such ‘duty’ for local politician Sumitra (Divya Dutta), he meets Phulwa (Bidita Bag), a cobbler and is infatuated with her. She lives in with him after he eliminates the goons who had brutally gang raped her. But this draws the ire of Sumitra, whose henchmen the rapists were. A new rival on the scene complicates matters for Babu – in both his professional and personal life. Baanke Bihari (Jatin Goswami) – who admits to looking up to Babu as his guru – has been handed a contract for the same three people as Babu.

The familiar premise of gangsters and unorganized crime is neither new nor the only one in which film-maker Nandy invests his characters and plot. What mainly engages the viewer are the banter and the mind-games played out between Babu and Baanke, and culminating in the deadly game of Russian roulette. And of course, the denouement…

The narrative, though by no means flawed, could have been tauter. The dialogues by Ghalib Asad Bhopali (son of yesteryear lyricist Asad Bhopali) add to the rustic flavour of the UP hinterland which is brilliantly captured by Prague-based cinematographer, Vishal Vittal.

In his illustrious career, while delivering his trademark one-liners, Nawazuddin has made his signature quizzical smile his own: it could mean so many things. As a hired hit man in BB, he never snarls – just a flicker of a smile, and his job is done. The supporting cast – led by the barely seen Jatin Goswami – is superb. Bidita Bag lends raw sensuality, especially in the bedroom scenes with Nawazuddin. Both are a revelation. The ever dependable Divya Dutta as the paan-chewing politician emotes well; while Anil George as Dubey, Shraddha Das as Baanke’s companion Yasmeen, and Murli Sharma are good. Bhagwan Tiwari as the corrupt cop saddled with seven sons and prone to doing the politicians’ bidding even while taking orders from his wife, sinks into his character well.

The soundtrack is average, with songs of Kishore Kumar and Mukesh playing in the background. ‘Chulbuli chulbuli zindagi’ by Papon is excellently sung and is a throwback to the ‘70s.

Though BB fails to have the electrifying impact of ‘Gangs of Wasseypur’, it still is a commendable effort by Nandy; and throughout the 123-minute runtime, the casting and the solid performances are spot on. And the 8 cuts finally imposed out of the 48 proposed by the censor board notwithstanding; if one can stand the cuss words and the steamy scenes, this film is for you.