Any film of Shah Rukh Khan romancing in Europe must inevitably fall in the shadow of that incorrigible romantic Yash Chopra’s ‘Dilwale Dulhaniya Le Jayenge’ — 22 years ago. In Imtiaz Ali’s ‘Jab Harry Met Sejal’, the director spouts the same tale (Jab We Met) of the girl severing her betrothal and marrying another. A lost engagement ring (‘suffering’ for the audience) is the excuse for treating the viewers to various destinations around the Continent — Amsterdam, Berlin, Budapest, Lisbon, Prague, Vienna, before settling down in Nur Mahal in Punjab! 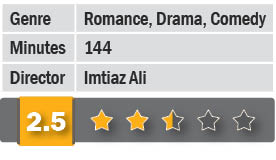 Sejal (Anushka Sharma), at the end of her month-long Continental tour, discovers that she’s misplaced her engagement ring in one of the cities and declines to return to  India till it is found.  The tour guide Harinder ‘Harry’ Singh Nehra (SRK) is retained, much against his wishes, to escort Sejal on one more trip. The encore trip becomes the reason for the film-makers repeatedly subjecting the viewers to Anushka’s Gujju accent — which, incidentally, is the only comedy quotient of the film. As the loquacious and crotch–kicking Sejal follows Harry throughout the night (ring be damned) to nightclubs and the viewer is exposed to Pritam’s tunes, my mind went willy-nilly to the mellifluous tunes of DDLJ. As Sejal concentrates on her Gujju accented Hindi, the ‘lonely’ tour guide expounds on the tractors of Punjab and the reason behind Punjabis’ ear-splitting singing.

The cinematography of KU Mohanan is magnificent.  Imtiaz Ali seems to have run through the entire gamut of the romantic genre. Shah Rukh still retains most of his charisma, and is on home turf with Anushka who does an earnest job as a Gujju traversing through Europe. While the first half is perky and tolerable, the second half sinks into mindless meandering. Midway through the second half, Sejal tells Harry ‘Jo dhoondtey hain, woh mil hi jaatey hain’. The audience were, by then, undoubtedly looking for closure!