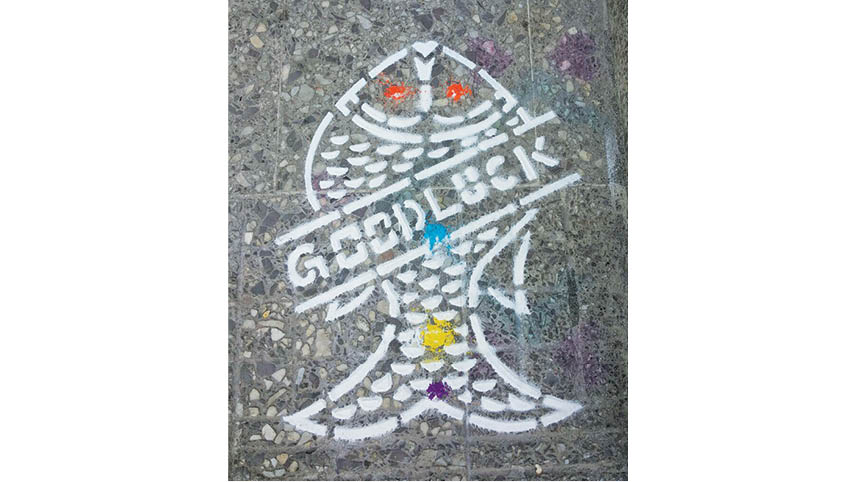 Be it New Year or birthdays, the accompaniment to dhan-daar is usually macchi no patio or tareli macchi. You go to Udwada on a pilgrimage and it would not be deemed complete if you were not served the boi for lunch or dinner. At weddings or Navjotes, there are the saas ni macchi enthusiasts and the patra ni macchi aficionados. Even the mava ni mithai that is placed in the sagan ni ses is in the shape of a fish (boi macchi). Agreed fish is a healthier dietary option. But, what makes it auspicious?

To understand the symbolic meanings of fish, we must first consider their habitat – their watery domain. Water holds ancient symbolic meanings dealing with the subconscious and depth of knowledge. Water is a storehouse to mysteries of the unknown. 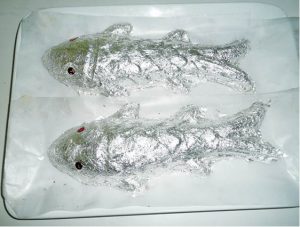 Water symbolizes birth and fertility. In the Zoroastrian tradition Avan Ardvisur Anahita presides over the waters and blesses women with fertility. ‘From water springs all life’, is not just a religious belief, but, also a scientific fact. Given the wonders that the water domain holds, the fish too has similar symbolic meaning. There are numerous species of fish, but the creature in general holds some prime symbolic meanings including: Fertility, Eternity, Creativity, Femininity, Fortune, Happiness, Knowledge and Transformation.

The fish was sacred in Greco-Roman mythology, where it held symbolic meaning of change and transformation. We see this in the myth of Aphrodite and Heros when they turned themselves into fish in order to escape from the ferocious Typhon. In Christianity, the fish is a symbol of abundance and faith as observed in the Biblical story of fishes and loaves. There are also several Biblical references as Christ and his disciples being ‘fishers of men.’ Here, man is represented as the transformational fish and the ocean is a symbol of the abyss of sin in which man finds himself.

As an ancient Celtic symbol, the symbolic meaning of fish (salmon, specifically) dealt with knowledge, wisdom, inspiration and prophecy. They believed to eat the salmon would mean gaining the wisdom of the well too. In Indian mythology, the fish is a symbol of transformation and creation. This is observed in the ancient flood myth in which Vishnu transformed himself into a fish (Matsya) to save the world from a great flood. In this form, he guided Manu’s boat (which contained the select few survivors and seeds of life to re-create the world after the flood subsided) to safety – a story that also finds an echo in Noah’s Arch and Shah Jamsheed’s Var.

Fish (Mahi) is symbolic of dispelling darkness, thus on all auspicious occasions Parsis like to dispel the forces of darkness in a manner they relish and delight the most– to tickle their taste buds with Sagan Ni Macchi done in a pungent patio and douse the palate later with a sweet Mavani Boi for dessert.

Ancient African creation myths talk of Mangala, the creator, planting seeds in the cosmic womb. From these seeds two fish erupted, and were set forth into the cosmos upon the waters of creation. We see from this myth the symbolic meaning of fish yet again dealing with fertility and creativity. In China, the fish is symbolic of unity and fidelity as it is noted that fish (particularly koi) often swim together in pairs. With this in mind, fish are often given as wedding gifts in the form of charms or figurines to present the newly-wed couple with an auspicious sign of fidelity and perfect union. They also represent fertility and abundance due to their ability to reproduce in speed and volume.

In Buddhism, the fish symbolizes happiness and freedom. Also, the fish makes an appearance as one of the eight sacred symbols (Ashtamangala) of the Buddha: Conch, Lotus, Parasol, Wheel, Knot, Pair of Golden Fish, Banner of Victory and a Vase.

In Norse and ancient European cultures, the fish had symbolic meanings of adaptability, determination and the flow of life. Salmon were commonly revered for their determination in their annual pilgrimage to their spawning grounds – the entire journey swum against the current.

The fish motif has universal appeal as a symbol of beauty and abundance of the natural world. Even today, at the ruins of an ancient Sasanian fire temple situated at Rae, near Tehran (Iran), one can see exquisite fish motifs adorning the temple walls. At the ruins of the palace of Cyrus the Great, one can see the image of the Great King wearing an Egyptian headgear with fish motifs. Cyrus was also Pharaoh of Egypt and ancient Egyptians used images of the tilapia fish as a symbol of regeneration. At the ruins of the palace of Cyrus the Great at Pasargade there is a relief depicting a man with one leg in the form of a fish’s tail. It probably depicts rejuvenation among his subjects. To date, Iranian Zoroastrians and Iranian Muslims usually place a bowl of live goldfish on the Navroze table for good luck. In the Zoroastrian mystic lore Mahi – the fish can see the smallest piece of object even in the dark. 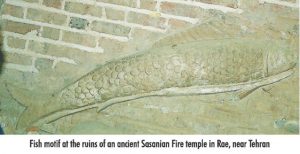 The first Dastur Meherji Rana of Navsari was a disciple of the mystic Dastur Azar Kaiwan. The latter used to fondly call the former as Mahiyaar (a fairly common Parsi name even today) which means, “friend of the fish that can see in the dark” or “one who can see through even darkness (of ignorance).”

Mystics like Dastur Kaiwan and MeherjiRana had the spiritual powers to see beyond the veil of darkness that covers our vision of this Universe and perceive the Will of God. Since fish (Mahi) is symbolic of dispelling darkness, naturally on all auspicious occasions, among other things, Parsis like to dispel the forces of darkness in a manner they relish and delight in the most – tickle their taste buds with Sagan ni Macchi done in a pungent patio and douse the palate later with a sweet Mavani Boi for dessert.

May this year be auspicious for the community ushering all the good energies that the fish symbolizes, particularly knowledge, fertility and rejuvenation!