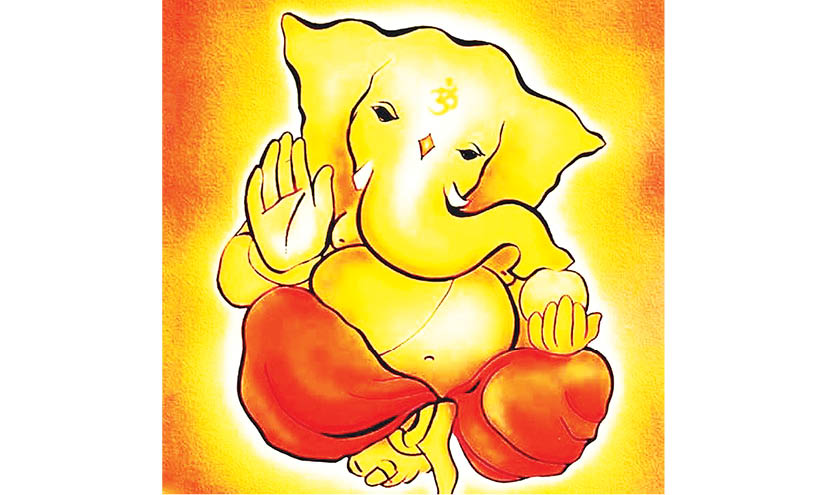 Spiritual consciousness is omnipresent, yet we are oblivious to it. It’s all around us, but few find it. Why? Because the monkey-mind needs to focus on our physical plane through which we can reach spiritual consciousness, especially in troubled times (vighna). This is where the lovable trouble-shooter Ganesha (vighnaharta) steps in. Ancient Indian literature, spiritually and historically refers to Lord Ganesh, the deity of auspicious beginnings. The Ganesh-Purana is named after him while the Skanda-Purana delineates his origin. The Nagdala-Purana says that rishis and munis bowed before this loveable elephant God saying ‘Om Ganeshaya Namaha’.

The Yajnavalkya-Smriti describes the cult of the Vinayakas (elephant spirits) who were very mischievous and loved to cause confusion, misery, chaos and untold hindrances. In Hindu temple architecture, the elephant represents the separation of this world from the spiritual-realms. In tantrik symbolism, Ganesha is drawn as a fiery-red triangle (the trinity of the father, son and holy-spirit) set inside a yellow square. In Yoga system, the very first (base) chakra of the human body, called the ‘muladhara’ is governed by Lord Ganesha. This chakra is the fulcrum of terrific energies which need to be uplifted from the base (sexual) to the sublime. Persons who control and direct this energy (called kundalini) go beyond the ephemeral pleasures of the flesh (called prithvitava to attain soul-knowledge (atma-gyan). Once this base chakra is controlled and then transcended from there to higher chakras, the person evolves very fast spirituality. But as we say in Tao, the journey of a thousand miles begins with the first step. Hence, once this most difficult chakra is transcended, the other six are comparatively easy to deal with and the serpentine-psychic-energy called kundalini can be tapped into quite easily if one is a true seeker.

Among the Hindu pantheon of Gods, Ganesh is the most popular. The name itself means the ‘people’s God (gana+ish)’. He is cute, cuddlesome, and loveable, with a huge belly and an elephants’ head and is famous even today in places like Java, Sumatra, Bali and Chiang Mai where I was surprised to see him immortalized in carvings. Ganesha represents the benevolent powers as the Lord of all auspicious beginnings. To his believers, he is almost a father-figure who can make everything go smoothly at the purely material level, bestowing health, wealth, name, fame, prosperity and worldly comforts to his devotees.

Ganesha also bestows spiritual wisdom since he is the official deity of knowledge. He is also invoked to help mental faculties since he presides over the training of the mind. Perhaps this is why a child’s formal education in most Hindu homes always begins with the writing of the words Shri Ganeshya Namaha on the first day of school. Ganesha is called Vinayaka but there is also a female Ganesha called ‘Vinayaki’.

The elephant-head can be traced as far back as the genesis of Hinduism when Brahma created the universe from a golden egg called Hiranyagarbha and assigned the duty of guarding the four directions (Dwarpaal) to four elephants. Thus the spiritual consciousness of Ganesha lives even today as a beginner of auspicious new things, a trouble-shooter, bestower of wordly as well as spiritual desires and a guardian who keeps all evil away and lets prosperity enter.

The earliest evidence of a female Ganesha or Vinayaki is a weathered terracotta plaque from Rairh in Rajasthan, which is said to date back to the first century. It is a figure of a corpulent human female body with the elephant head. References to Vinayakis also abound in the puranas. The Matsya Purana mentions Vinayaki as one of the two hundred ‘celestial mothers’ created by Mahadev, or Shiva to consume the blood of the fiery demon Andhaka.  Linga Purana also mentions the deity. Malini, a demoness, who has an elephant head, drinks Paravat’s bath water and is honoured by Shiva. Malini, with her elephant head and a human female’s body is often said to be the first Vinayaki and is also seen depicted amidst the sculpture of Causath-Yogini temple in Jabalpur, Madhya Pradesh. She stands regally while Ganpati is shown supporting her right foot. Sri Kumara, a text dating back to the sixth century invokes Vinayaki as follows:

Prostrations to the Goddess Vinayaki, who is an elephant above the neck and below is a youthful female. Salutations to Sakti-Ganpati who is vermilion, the  colour of the horizon when the sun is about to set, her corpulent belly hangs out enticingly, her breasts bend her waist with their weight and she sports ten splendid arms holding weapons.