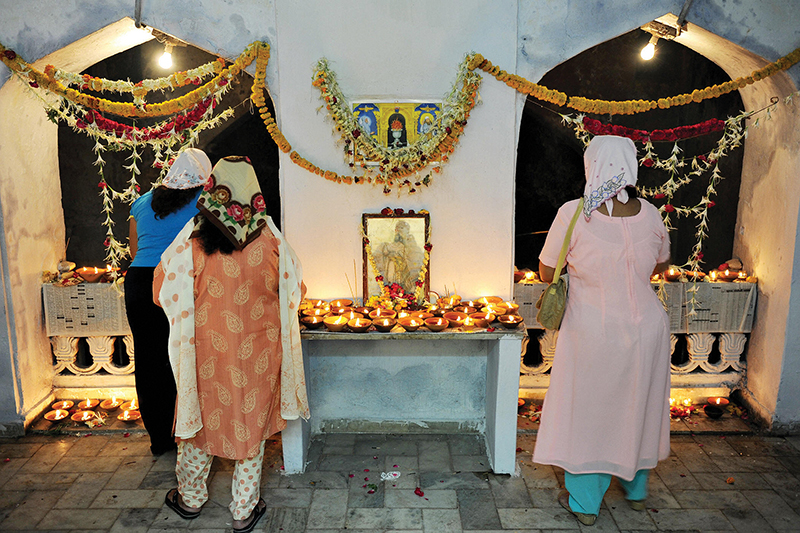 PT Reporter Khushroo P. Mehta speaks with priest brothers, Er. Farshogar Madon, serving at Soonaiji Agiary and Er. Harvesp Madon from Godrej Baug Agiary, shares with you relevant insights into aspects about our religious rituals as well as those that are to be observed while praying.

PT: What is the significance of the ‘boi’ and ringing the bell nine times in the kebla?

Er. Harvesp: The Boi is a very significant ceremony performed, as we drive out evil which tries to overpower the good. During Boi, the Mobed recites the Atash Ni Nyaish, rings the bell on the words dushmata, duzukhta, duzvarshta (bad thoughts, bad words and bad deeds), to remove evils and negativities by ringing the bell three times on every word). The bell is made of an alloy which gives out a loud and clear sound – required to create good vibrations. Dried wood (Kathi) and fragrant wood (sandal wood) is offered to Atash Padshah Saheb during the course. It is believed that as far as the vibrations of the bell reach, the entire area gets purified.

PT:  What should a Zarthosti do when present in the Agiary or outside, on hearing the boi bells?

PT: What is the importance of covering our head while praying?

Er. Harvesp: Covering the head is an important part of the attire of a Zarathosti. A few generations ago, Parsis covered their heads day and night. Prominent Parsi figures have done so for ages. When sixteen Sanskrit Shlokas were recited to king Jadhav Rana, it was mentioned in one of such Shlokas, that covering of the head is one of the practices followed by Zoroastrians. With change in time and assimilation, this practice was discontinued. Most Parsis, now cover their heads only while participating in prayers, attending religious ceremonies or during a visit to the fire temple.

PT: Why is only a topi or a scarf allowed?

Er. Harvesp: Covering one’s head represents a bondage to God. Most importantly, it helps in the undisturbed exchange of spiritual energies during prayers. These energies are mainly present near the crown of the head. Covering one’s head thus aids such energies.  It also helps in concentration of vibrations created by the prayers in the human mind. It is important to cover the entire head. There are many views on this, some say it is ok to cover one’s head using a handkerchief while some say otherwise. However, it is important to wear a cap/scarf that enables full coverage of head.

PT: What colour topi or scarf should be worn? Does stitching of the topi follow any religious significance?

Er. Farshogar: The head-cover should preferably be white in colour. Nevertheless, any other colour would suffice the purpose. There is no special way in which a cap is stitched, other than the need to cover the head entirely.

PT: Do we also have to cover our feet while praying, or can we pray bare-feet?

Er. Harvesp: While praying, Zoroastrians should not keep their bare feet directly on the ground. They should wear footwear. The bare feet may be placed on a carpet or after wearing socks, but never directly on the ground. During prayer, energies and vibrations are generated. The soles of the feet are believed to be the places from where unwanted energies go out when they come in direct contact with the ground. The power generated by the Kusti prayers and rituals becomes null and void if bare feet touch the ground. In Gujarati we say, “kusti tuti gai”, which means that the kusti which is the basic necessity to start any prayer is null and void.

PT: At home, which is the best place to sit for prayers?

Er. Farshogar: The best place to pray at home is facing the diva. Keeping a diva on for 24-hours is a must in all Parsi homes. The direction in which one prays depends on the time of the day when the prayers are said.