Tired of false assurances, un-kept promises and negligence on the part of Mumbai Metro Rail Corporation Limited (MMRCL), the Trustees of JN Petit Institute finally decided to move court, after a 119-year-old ornamental and decorative limestone finial collapsed and got destroyed on 25th August, 2017. The irreplaceable damage to the ‘Grade II A’ heritage building, built in Neo Gothic Revival style, houses over 1 lakh books of which 2,400 are rare findings and 12 manuscripts, is said to have occurred due to the dredging and drilling work being carried out for Mumbai Metro Line III. “We have always cooperated with the MMRCL officials. However, due to unmonitored vibration levels, our heritage structure underwent damage which is unacceptable,” said an official from the Administrator’s Office, who requested anonymity.

On visiting the library, I experienced first-hand the high decibels of noise pollution caused due to the Metro construction work, making it virtually impossible to even communicate with the administrative official seated right across the table! According to set measures, the permissible maximum vibration limit felt by a heritage structure should be 5mm/sec. However, the recorded vibrations felt by the Institute as of 6th September, 2017, when no construction work was carried out in front of the Institute, was 20mm/sec. 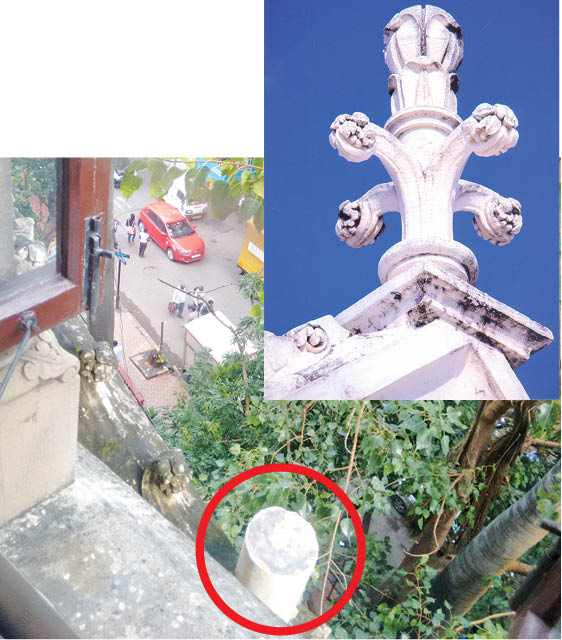 The Institute filed the petition with the High Court on 8th September, 2017, based on two unacceptable occurrences. Firstly, MMRCL wanted a portion of JN Institute’s garden to construct their entry and exit point, with a lift; and secondly, the final straw was reached when the finial collapsed. This is indeed unfortunate as the JN Petit Library had undergone comprehensive restoration work in 2015 and has even won the UNESCO Award.

The construction of the entry and exit points with a vertical moving elevator, near the portion of the garden, could be extremely dangerous as the building stands on sandy foundation. In order to avoid any harm to the heritage structure or building, a ‘piling wall’, almost 3 meters away from the very arcade (entrance) of the institute is to be constructed underground, so that the sand on which the building is constructed, does not slip away. “We are very close to the maidans which act like reservoirs during rains. The shifting and moving of natural elements underground is a seasonal phenomenon that needs to be considered to avoid any major damage to the building’s foundation,” explained the official from the Administrator’s Office.

Although instruments like a ‘vibration monitoring device’ and a ‘settlement pin’- have been implanted to gauge if any sinking has occurred, no proactive maneuvering of these devices takes place, especially when the work is being carried out close to the Institute. As per Pramod Shahasrabuddhe, Structural Engineer of Sterling Engineering and Consultancy hired by the Institute, “The damage done to the finial would have been avoided, if the structural survey carried out by the officials had also included the consideration of ornamental elements of the building. The building so far is strong enough, but surveying every other element of the heritage institute, which  includes its ornamental elements, is extremely necessary.”

Speaking to Parsi Times, the Site Manager of DN Road, Santosh Patil said, “Our work is being carried out on DN Road, however the finial that collapsed was on Maharshi Dadhichi Marg, which is located on the inside lane and hence it is not because of the construction that the finial collapsed. The finial is very old and the anchoring iron road that held the finial to the structure was rusted and collapsed due to the rain and strong winds on that day.” On asked about the monitoring of the vibrations, he said, “We have installed our monitoring device ‘Minimate Plus’ which records a vibration level much lesser than the acceptable limit.”

The court’s scheduled first meeting was held on 14th September in front of Chief Justice, Manjula Chellur and Justice Nitin Jamdar who were quiet receptive about the Institute’s grievances and have asked for security to be provided towards the structure of the building and have discussed that the data collected by the officials through their devices be shared with the Institute on daily bases. “The council voiced our concerns and the judges understood that we are not asking for the moon. We want the data of vibrations and other dimensions generated by them, so that we can share it with our consultants and engineers to be sure of the safety for our heritage structure,” said a senior management official of JN Petit Institute.