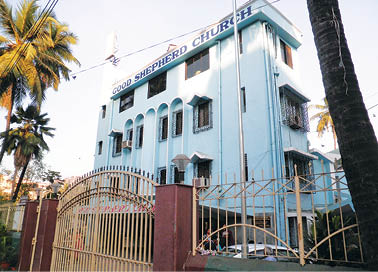 Four Bungalows, in suburban Mumbai is a neighbourhood named after the ‘four bungalows’ that once existed there during the British occupation. Located three kilometres from Andheri station, in the vicinity of Lokhandwala Complex, it is popular as one of the most systematic and well-organized hub for shopping. The two main sites here are the Good Shepherd Church built in the 90’s, described as Zigami Chevron-shaped structure and St. Louis Convent, located within the second lane from the Four Bungalows junction. 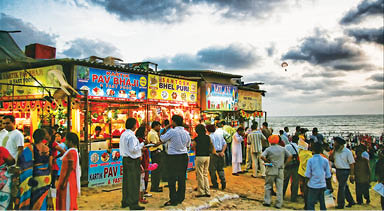 Surrounded by the Arabian Sea and home to many Bollywood celebrities, Juhu was originally called ‘Juvem’ by the Portuguese. It is most famous for the sprawling Juhu Beach. The food court at its main entrance is known for its ‘Mumbai style’ street food, notably bhelpuri, pani-puri and sevpuri. The beach is among the most popular sites in the city for the annual Ganesh Chaturthi celebrations where thousands of devotees arrive in grand processions, carrying idols of the Lord Ganesh of various sizes, to be immersed in the sea.