Two weeks after the tragic accident at Udvada station where Aspi Sepoy unfortunately lost both his legs, our community has stood by him in prayer and financial aid to ensure he gets back to normal functioning, thanks to the proactive efforts of WZO Trusts Chairman, Dinshaw Tumboly and Vada Dasturji Khurshed Dastoor. Adding to the relief, there is news that railway authorities will take adequate measures to raise the dangerously low Udvada platform height, which caused this unfortunate accident. Parsi Times Assistant Editor, Delaveen Tarapore reports.

Over the past two weeks, our community has come together in support of Udvada’s Zoroastrian Museum manager, Aspi Sepoy, who met with a deadly accident at Udvada railway station on 15th September. As Aspi was about to board the Firozpur Janta Express that halted on platform number 3 at Udvada railway station at 3:57pm, he tripped over the uneven platform and slipped into the wide gap between the platform and the footboard of the train, which had just begun to depart, and lost his legs.

Our community will be pleased to know that our spirit of Parsipanu and brotherhood reigns supreme as Zarthostis across India and the world, have come together and accumulated enough funds to procure prosthetic legs for Sepoy. “We have managed to collect Rs. 16 lakhs as on the evening of 25 October, 2017. The immediate appropriation of the funds being received at present will be used for the hospitalization and prosthetic legs. However, the amount which will be required during the course of Aspi’s complete recovery will be much more. One has to look beyond present expenses such as hospitalization and prosthetic legs. What the future holds for Aspi has to be visualized from a long term rehabilitation perspective. The road is going to be long and rocky,” said Chairman of WZO Trusts, Dinshaw Tamboly. Aspi Sepoy has been assured of getting his salary and his job at the Zoroastrian Museum, but additional financial support will be needed, as the interest yielded from the collected corpus will be given to him for assisted living support and the education of his two sons.

Though Aspi has been recuperating after being brought to Parsee General Hospital, the progress has been slow.  “He’s better but was running temperature due to Septicemia – a condition caused due to the accident, where alongside blood loss, the injury is prone to infection causing fever. Once the wounds heal, we will be start work on prosthetics,” said Dr. Jamshed Bunshah who has taken up the case of Aspi Sepoy, who would be shifted out of the ICU in a couple of weeks. The treating doctors have chosen to obtain the prosthetic limbs from German ‘Endolite’ as the best option for Sepoy.

The community will be relieved to note that work to raise the height of Udvada platform has commenced. Last year, Parsi Times had undertaken firsthand investigation that proved that a tragedy was in the waiting due to the wide gap between the footboard of trains and the platform. The height between the railway tracks and the platform is a mere 23 inches, however, the distance between the platform and the footboard of outstation trains measures 45 inches. According to the Railway Board, the nationally prescribed height of platforms from the tracks should be 33 inches.  Currently, the length of Platform No. 1, where most trains from Mumbai halt, has been extended to accommodate all compartments of the train. Also, the height of this extension has been increased, but even so, this increase in height caters to only the newly constructed platform which comprises only 20% of the entire platform – the old platform maintains the disturbingly dangerous nearly one-foot gap.

Although the said work on the platform was initiated earlier and left half done, Aspi’s accident has further brought to light the 4×4 inches concrete blocks that are placed all over platform number 2 and 3, with a gap of almost 2 inches between each. This makes the platform even more risky for commuters who travel with luggages, more so for senior citizens. With Aspi’s accident garnering enormous media attention, the raising of the platform is underway and is scheduled for completion by end October, 2017. “Initially there was rubble and concrete stones all over the platform, which have been cleared by the workers after the accident. Besides the risks that the concrete slabs pose, the rubble made it riskier to walk even on the remaining part of the platform,” said Manager of Udvada’s NM Wadia Parsi Dharamshala, Shahin Mehershahi (Irani) who was one of few people who first rushed to Aspi’s aid. 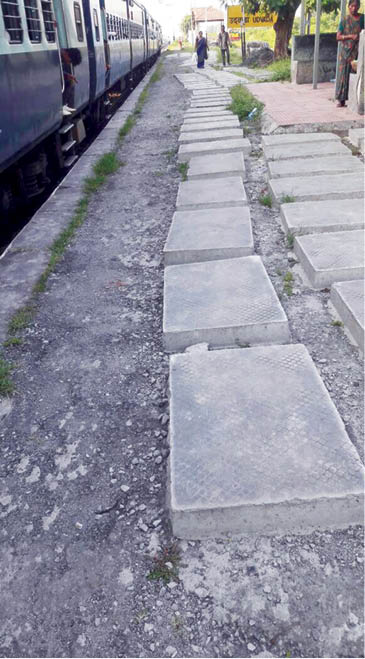 “We are blessed to be part of the marvelous Zoroastrian community. We have institutions that take up causes of those in distress, individuals and institutions that dig deep into their pockets for supporting humanitarian causes, and those who do not have deep pockets offer their sincere prayers for the wellbeing and recovery of those facing unfortunate times. The result of a community united in this manner is always a win-win situation. I can only pray that the grace and blessings of Ahura Mazda remain on our community for all time to come,” said Dinshaw Tamboly.