To an extent, Farhan Akhtar’s tryst with musicals continues in his latest ‘Lucknow Central’. It’s a wonder that, having sung in six of his previous films, he doesn’t croon a single song in LC despite being the lead musician in his group! But moving ahead… 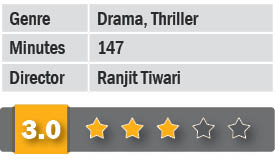 Kishen Girhotra (Farhan Akhtar), an aspiring singer from Moradabad, is accused and convicted of a murder he hasn’t committed. Sentenced to death and awaiting the gallows in the notorious Lucknow Central Jail, he’s elated when he hears that an NGO representative Gayatri (Diana Penty) is assigned to select musicians from his jail to form a band that will vie with bands from other jails in the state. His four associates – Pandit (Rajesh Sharma), Victor (Deepak Dobriyal), Parminder (Gippy Grewal) and Dikkat (Inaamulhaq) are selected as part of his troupe. How the rehearsals metamorphose into a plan of escape, forms the crux of the film’s second half, which is relatively taut.

Debutant director Tiwari makes the most of a script taken from the true story of a band ‘Healing Hearts’ of Lucknow Central Jail, faintly reminding the viewer of the recently released ‘Qaidi Band’. Farhan Akhtar’s intensity of emotions at being wrongly incarcerated is not convincingly portrayed. Diana Penty is a revelation – coming across strongly as a woman who knows and speaks her mind, standing up to the authoritarian jailor (Ronit Roy in a tailor-made role) who’s always a step ahead of the convicts’ plans. The best dialogues are reserved for Bhojpuri and Hindi film veteran Ravi Kishan as UP Chief Minister Pawan Singh Chaturvedi who doesn’t think twice before cutting down the jailor to size with his seemingly innocuous remarks.

Of the five songs, the catchy ‘Teen Kabutar’ would have a longer recall value. But as a critic what intrigued me the most was the allusion to composers Nadeem–Shravan along with two of their notable songs – especially with T-Series being the music producers of the film!