Yazdi Desai, Chairman, BPP, updates the community about the ongoings in the BPP, with Parsi Times’ exclusive column, BPP Connect .

The Alliance Is Back On Track!

After the advent of Universal Adult Franchise it is inevitable that a certain amount of political savvy will enter into the campaigning strategies of any community member desirous of serving the Community as a Trustee. Consequently, it is only natural that not all Trustees will be in agreement on a single solution for Community issues, and those on the same page will birth a unified working body. In the present Board, there is a positive working arrangement, as is the case between Kersi Randeria, Noshir Dadrawala, Zarir Bhathena and myself, which has been built out of our collective and mutual aim for the betterment of our Community. This flows out of a common working program that each and every Trustee holds dear and wants to implement in the interest of the community. However, since the Trustees comprise strong personalities, who are strong willed, passionate and independent thinkers, there is sometimes bound to be a difference of opinion about the right direction for BPP to take to ensure the welfare of the community. Consequently there are bound to be disagreements and the rift is widened when Trustees have strong convictions borne out of their past history in the Community. So no one is willing to give up his position easily and rightly so! In this manner, recently there was a rift between the unified working body on a couple of issues. Though usually unified in working through the solutions 98% of the times, a few issues proved difference in perspectives, which is also quite healthy as it shows that the commitment and loyalty towards the community reigns supreme over all other loyalties. A few in the community and a section of the Parsi Press, who were uncomfortable with the strength in unity of the Alliance were happy with the rift and even stoked the fire. Unfortunately, for these selfish vested interests, the strong undercurrent of commitment to the community’s welfare flowing through the Trustee melted the rift and the Board is once again functioning harmoniously. My thanks to my colleague Kersi Randeria for facilitating the mending.

Living up to the expectations of our Community who put their faith in us to lead this august institution, we have been mature and strong enough to reason with the angst, which had over the past few weeks become apparent in the public domain, and find a way to work harmoniously in the interest of our Community. What is also heartening is that even the Trustees who were not part of the unified working body are now working together in the interests of the community.

So be rest assured, even if we fight,

We are committed to doing by the community, right! 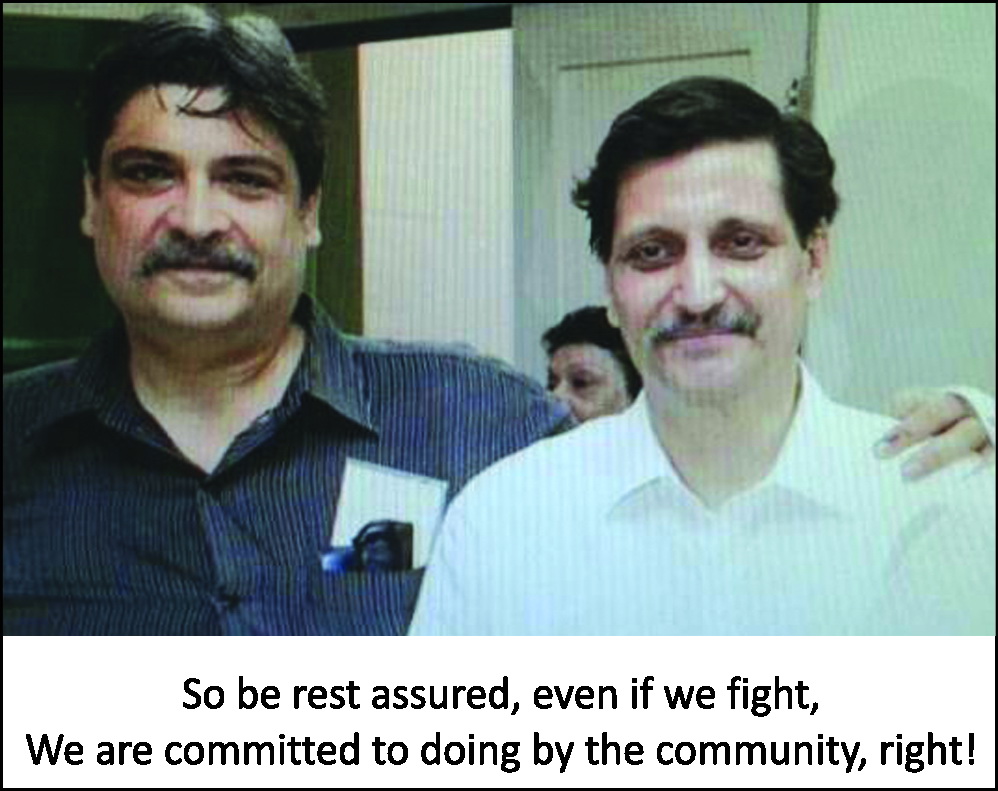 It is incredible that week after week, we are allotting free houses to dozens of the poor and deserving. Till date the new Board in 2 years has allotted 102 charity flats. This is truly amazing, especially compared to 75 free flats allotted by the previous Board in its full term! Just when the Board feels that it has very few flats left to allot, miraculously a few more vacant flats fall in our lap, either through occupants surrendering the flats, through death of lone occupants, or settlement of cases etc. We are also working towards and are confident that we will be able to persuade all those occupants who have locked their flats and settled abroad to surrender their flats to the BPP.

The Ahura Support Residential Home has been developed by the Ahura Support Trust at the Dossibai Home in the Masina Hospital Complex. This is a residential facility for community members with Special needs. Representatives of Ahura Support had met the Trustees on 25th April 2017 and had appealed to the Trustees to support this noble cause. What is proving to be a stumbling block is the high monthly cost per child of approximately Rs. 30,000/- which many parents cannot afford. The BPP decided to sponsor 5 children by every month donating Rs 1,50,000/- to the Ahura Trust.  This monthly sponsorship has started from June 2017 and will continue to grow.

The renovation of the Gamadia Boy’s Hostel has started in full swing. Plastering of the external wall is underway and the bathrooms and toilets of the first floor are being renovated. Tiling work is underway. It is indeed heartening to see how the Community has come together and contributed generously towards the appeal made for the repair of the Gamadia Boys Hostel – the faith

imposed in the BPP is our biggest reward for all the effort and time we put in! We will continue providing regular updates on the same.

Building No. 785, which is a corner building bang opposite the Rustom Framna Agiary of the Dadar Parsi Colony, is an eyesore, sticking out like a sore thumb amongst the verdant and lovely Dadar Parsi Colony. This dilapidated building whose residents have been moved to alternate accommodation with a couple of them still continuing to stay in this building, has proved to be an embarrassment to the BPP. Numerous complaints from Dadar residents have been received by us about the unkempt compound with the uncleared, strewn household junk dumped in the front yard, rank vegetation, broken boundary wall and no lighting. We have decided to spruce up this area. Trustee Kersi Randeria who is a Dadar resident himself has taken it upon himself to supervise this sprucing up of this building and the adjoining buildings whose compound walls are all broken and whose compounds are neglected and unkempt. The BPP has allocated Rs. 20 lakhs for this, so that these BPP buildings are on par with the beautiful Dadar Parsi Colony. 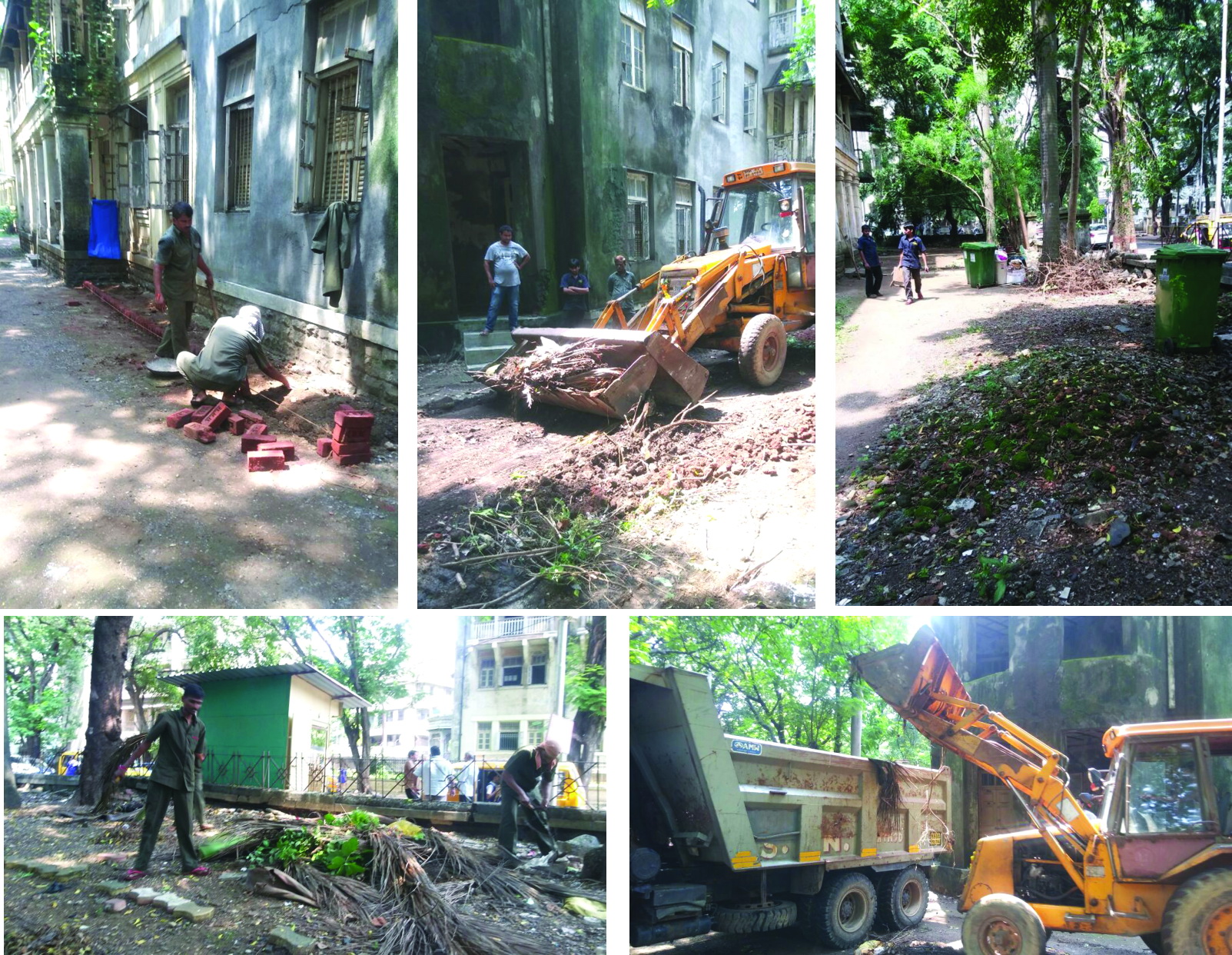 The BPP is co-ordinating with the BMC to ensure that garbage collected from Colonies and Baugs is segregated into wet and dry garbage and various options are being considered for treating the wet waste. Colony/ Baug Associations will be intimated of the steps in the coming weeks.

The Statutory Audit of the BPP Accounts has been completed and the Returns under the Income Tax Act and to the Charity Commissioner will be filed before the due dates in October 2017. The financial figures of the BPP (excluding the NN & RN Wadia Baugs) for the Financial Year 2016-17 show a deficit of Rs 4.65 crores.

The rent and hoarding income totals to Rs 6.23 crores, whilst the expenses on properties totals to 9.94 crores leaving a big deficit of Rs 3.71 crores between the income from the properties and the expenses of the properties. Hopefully the increase in Service Charges by Rs 750 per flat per month will help to reduce the deficit.

In addition the BPP has spent Rs 81 lakhs (net after recovery from tenants / licencees) towards the repairs of buildings in the BPP colonies.

Further, the BPP has incurred the following other expenses:

The Statutory Auditors have given the BPP a Management Letter detailing several audit issues. One of the issues is Leave and License Deposits:

The Trust has leave and license deposits received from licensees of flats in their various Colonies of Rs. 60,64,97,501/-. These amounts were earlier invested in earmarked FDs. However, in the recent years these deposits were withdrawn after their maturity and these sums were used for routine day to day expenditure of the Trust. Thus as at 31st March, 2017 only Rs. 7,19,89,944/- of FDs remain earmarked against the Leave and License Deposits. Hence there is a shortfall of Rs. 53,45,07,557/-.

The community will recollect that the Ex-Chairman, Dinshaw Mehta and those close to him have been saying that the BPP must not increase the Service Charges to bridge the funding gap but must give away flats on Security Deposits which should be used to fund the running expenses of the BPP. From the above Audit Objection, it is clear that their contentions are all hogwash and in violation of principles of Accounting Corporate Governance. The Security Deposits received cannot be frittered away as has been blatantly done by Dinshaw Mehta over the past years and as some of the present Trustees are also suggesting we should do. The Security Deposits must be invested in Fixed Deposits and only the interest be used by the BPP. Effectively, Dinshaw Mehta has washed away BPP funds of Rs. 53 crores for political popularity.

The Financial Propriety, Honesty, Transparency and complete Dedication towards uplifting the underprivileged of our Community and the Community’s welfare as a whole, brought in by this new Board, will help the BPP survive, and our Community thrive!