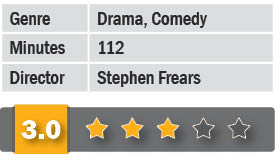 History is almost always recorded by victors and vanquishers. A fragment of coincidence then that Shrabani Basu, while on a visit to the Queen’s summer home at the Isle of Wight in 2003, found a couple of objects which aroused her curiosity and heightened her interest in the subject – enough to pen it all in her 2010 book by the same title.

Two decades after her Oscar-nominated role in ‘Mrs. Brown’, Judi Dench reprises her portrayal as Queen Alexandrina Victoria of UK and Empress of India. Abdul Karim (Ali Fazal) and Mohammed (Adeel Akhtar) are selected to sail to England in 1887 to present a commemorative coin to the Queen on her Golden Jubilee as monarch. Defying the code of conduct imposed on him to look down and keep his gaze away from the Queen’s, he stares impudently at her, ruffling feathers and causing consternation among her son Bertie – the Prince of Wales played by Eddie Izzard, her private secretary and her personal physician (Paul Higgins), particularly as the monarch finds him ‘good-looking’.

The Queen is shown as aged, sloppingly having soup – part of her seven-course meal at a banquet where royalty from all over Europe and the British Empire have assembled.

When ‘munshi’ Karim from Agra tutors her in the Hindustani language and all things ‘Indian’, her deep interest in the hitherto forgotten sub-continent causes her to build a Mughal room in the palace with paintings of Indian nobility and even a replica of the Peacock throne. The film is mainly about the relationship between the two. Lee Hall, who’s written the screenplay, intersperses slices of Indian history – whether it’s the origins of the Taj Mahal or the cause of the Indian Mutiny. The film is also as much about Karim supplanting her inner circle as confidant and resulting in antagonising them.

Where the film succeeds is in the stupendous performances of the 82- year-old Judi Dench, still a powerhouse of acting and the talented Ali Fazal, cherry-picked from Bollywood. However, the supporting cast fails to match the brilliance of the two lead actors. The usual artistic  (read: cinematic) liberties have been taken with the film opening with the title-card ‘Based on true events – ‘with the suffix ‘mostly’ appearing a second later.