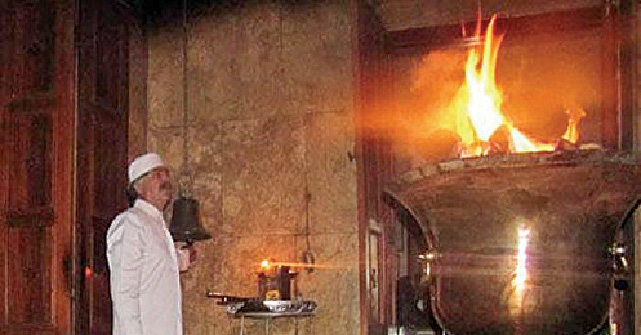 The etymology of the word ‘religion’ comes from the Latin root word ‘religare’ which means to unite or to join. To join or unite what? Obviously, Man with God and more importantly, man with man. Has any religion in world history managed to do that? In fact, most wars have been fought in the name of religion! All religions preach tolerance but savage intolerance can be found even within the same religion, at times, resulting in violence which ironically is shunned by most religions. So who is a better human being? An atheist who has kindness, love and compassion for everyone or a so-called religious person who doesn’t hesitate to become violent in the name of religion?

Almost all of us label ourselves as Parsis, Hindus, Muslims, Sikhs, Buddhists or Christians, etc., being driven by spiritual forces and personal wish to connect with the highest supreme force of nature – God. Maybe some of us are driven by egotism, fear and desire. The history of religion is the saddest of all histories since religions have been the source of much sadness, grief, tragedies, oppression and today, even terrorism.

Gurdjieff said that ideally people of goodwill should not belong to any religion; they should only belong to God who does not belong to any religion. As Guru Nanak said, “There is no Hindu and no Muslim. There is only Man.” It is true that for a few, very few, religions are also the source of compassion, self-transcendence and love for everyone and therein lies all the hope for humanity. One should constantly be on guard of officials, organizers and politicians of religions. All the sages call for a reorientation of the mind and the heart, rather than scriptural learning, execution of liturgical details or doctrinal disputations. The movement in the new direction, away from selfishness and egotism imparts authority to the words of a sage and this authority is not ecclesiastical – it’s a moral and spiritual authority from a lived experience, not from hearsay or reading. The great Indian Kabira hath said, “Pandit, Tu Bole Lekha-Lekhi, Main Bolun Aankho-Dekhi,” meaning ‘Oh scholar, you speak of what you have read, I speak of what I have experienced in life!’

We also need to be wary of Dhongi-Gurus available in abundance these days. A real Guru shuns the hustle and bustle of city-life and its large population, and retreats into the quiet of a deep forest or a high mountain or where there is peace. He doesn’t impart knowledge to anyone and everyone and most certainly, not for money. Anyone who does self-publicity or asks for money or is media-savvy is not a real Guru. He is a peddler of knowledge. False theologians, preachers and philosophers use sweet words to sway people but not words of experience. They have no authority to speak because they have not ‘lifted up the curtain’ between them and God. They merely try to increase a sense of self-importance. Real saints and sages are very few. They constantly seek and experience the highest vision of the ultimate – of God, of Truth, of the Source, of the One.

Most of today’s modern day Gurus live a life of luxury and are filthy-rich. They have neither the comprehension nor the intensity of the whole vision. They spin webs of illusion. They are egoistic. No wonder when Gautam Buddha woke up from the hypnotic sleep of this world, he saw the truth directly and uttered, “The Tathagata has no theories.” Guru Nanak preferred to associate with the wandering and poor Yogis and Sufis who searched for God rather than the established and influential pundits and mullahs who preached God. This is why the Hindu philosophy of Vedanta makes a lot of sense – its greatest insight is the oneness and sacredness of all reality. This is especially strongly expressed in the Advaita-Vedanta tradition of Shankara and Gaudapada – ‘there’s only ONE reality and that is Brahma (God)’. Us Zoroastrians named it Ahura Mazda. Anything and everything else, which can claim to be separate from it, is false (mithya or illusion). The Vedantic sage Ramana often said, “There is no other”. It is the “otherness” that Vedanta denies. Ultimately, Brahma and Atma are identically one. Plurality or Duality is sheer ignorance. The Rig Veda (line164) reads, “Reality is one and the wise speak of it in many ways.”  Guru Nanak speaks of ‘Ek Omkar’ or the only one reality and the falsehood of all else.

Even great saints of the Sant Tradition in India like Ramananda, Kabir, Tukaram, Mirabai and others, expressed the idea of oneness by way of love and devotion. According to the Bhakti Tradition, God is one and the only reality and all the rest is illusion. So you see, a truly spiritual person sees God manifested in everything whether he reads the Bible or the Qaran or the Avesta. He can call God by various names, like Pita, Rab, Rahim, Govinda Hari, Omkar which means the one whose form is the sacred vibration of Aum (Om). If you can realize this, the light within you can merge with the Eternal Light – right here, right now, in this incarnation itself!