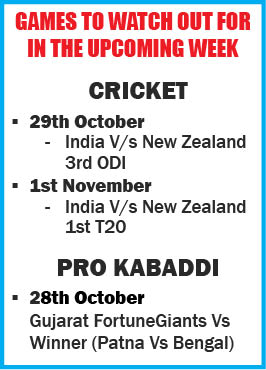 India Beats New Zealand In 2nd ODI: Good batting performances from Shikhar Dhawan (68) and Dinesh Karthik (64*) helped the men in blue clinch the 2nd ODI by 6 wickets against New Zealand, in Pune. Batting first on a slow surface, the visitors put up 230-9 in 50 overs, courtesy Henry Nicholls’ 42. Bhuvneshwar Kumar was the pick of the bowlers scalping 3-45 in his 10 over-spell while Jasprit Bumrah and Yuzvendra Chahal picked up 2 wickets each. In response, India lost Rohit Sharma early on 7. Shikhar and Virat looked to steady the ship but Virat on 29. Hardik Pandya contributed 30. Finally, Karthik and Dhoni remained unbeaten on 18. Bhuvneshwar Kumar was Man of the Match. Both teams are headed to Kanpur for the decider.

India wins Asia Cup: Manpreet Singh led India, put up an outstanding show in the finals beating Malaysia 2-1 and were crowned champions in the Asia Cup at Dhaka. India opened the goal scoring in the third minute with Ramandeep. Lalit Upadhyay doubled the lead to give India a 2-0 edge. Malaysia struck back in the 50th minute with Saabah Shahril’s goal and tried to score an equaliser, but India held on and emerged victors.