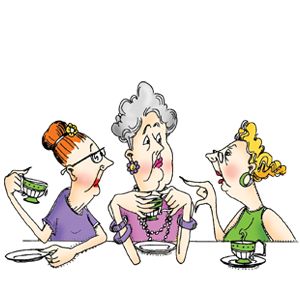 With the Divali festivities behind them, Meherbai and her Mandli had a Chicken-Farcha-Pe-Charcha with cold coffees at the PVM Gymkhana. The subject under discussion was ‘Sasujis and Vahumais’!

Meherbai: My Sasuji was extremely kind and loving and treated me like her own daughter. In fact, she pampered me and at times, she and I would gang-up against Merwanji and would go for shopping or to a movie or a holiday. I miss her every day. Dagley ney pagley yaad aavej! Behest Bicharaney! Mahney ghanu sukh apyu!!

Themi Tindoroo:  That’s because she was also a daughter-in-law once and knew how it feels! Kyon Ki Saas Bhi Kabhi Bahu Thi! My mom-in-law was a terror and my hubby Tehmul wa a pukka mama’s boy. His favourite words being, “Maiji is always right.” Once, Maiji got drunk at someone’s Navjote at Cama Baug and started dancing a Maharashtrian Laavni on the stage, but still in Tehmul’s eyes, she could do no wrong. You know what he said? “My mother, sober or drunk, I love her.” If he had shown one tenth of that love to me, we could have been so happy!

Rockstar Rusi: My gher-jamai Goosi (Gustad) is the bane of my life. Saalo mafatyo, maathey parelo chey! He orders me around as though I’m his Baap No Nauker and when we have an argument, my spoilt daughter Shernaz , takes his side and my wife says, Rusi and Goosi, both keep quiet! Though his name is Gustad, he is actually an Ustaad!

Pastailee Piloo: I sent my dikri to her Sassru, which is just next door and now she treats me like an ayah. I have to cook special meals for her, shop for her and what’s more, she even sends her clothes to my house for washing as there is no washing machine in her house! I should have given her a washing machine and a microwave instead of the Lagan na dholia, chairs and teapoy!

Silloo Siplee: I just remembered another ‘Kehti’ (saying) – “Sor Maa Saasroo, Aant Ma Khasroo!’ (Loosely translated it means – when the daughter’s sasural is in your sari-pallo, you get a shoe in your mouth!)

Jimmy Jambox:  Silloo, stop your ‘Kehtis’ and home-made translations! Actually, my Vahu-mai is so sweet that I call her my best friend in the house. My useless insomniac son likes to smoke till 2 or 3 am and so she converted our kitchen into a separate smoking-room for him to be used between 10 pm and 3 am! After that we slept peacefully for some time until the next door neighbour got a dog who barks all through the night keeping us awake!

Jabri Jaloo: My daughter-in-law treats me like a ‘Nanny’ and not a ‘Granny’. She dumps her two kids on me and goes-off to lead her own life as a social-butterfly.

Mithoo Madam: That’s because you’ve spoilt her from the start. Grandchildren should be treated like library books- you borrow them, enjoy them and return them. They are for our enjoyment – not for doing ‘Vahitru’! Jaloo, kaal-ne-kaal parcel off both the brats to your mathey pareli vahu!

Banoo Batak:  Even my hubby and I depended upon my mom-in-law for years. The poor woman made breakfast, lunch and dinner for us and even packed our lunches apart from doing all the house-hold chores. But we were both working long-hours and providing financial support to her. She did not seem to mind because she never had a life with her boring husband and my hubby was her only child. Today she is bed-ridden and looked after by servants. It is very sad but our working-life does not permit us much time for her but we snatch some moments to sit near her and talk.

Maherbai:  Banoo, shame on you. This speaks very badly about your mom’s ‘Kelavni’ and ‘Sanskaars’.

Jabri Jaloo:  Not half as much as other daughters-in-law who spend more time at their ‘Mahiras’ than their ‘Sasras’!

Sensible Sheroo:  I’m also a mother of two girls and my sons-in-law are the sons we never had. We married our daughters when they were in college so they could adjust to their in-laws more easily. What’s more, on festive days, they have to enjoy with their in-laws and we discourage overnight-stays and frequent visits so that they can integrate better in their husbands homes. No wonder, both are happily married!

Freny Film-buff:  Hey guys! Remember the mothers-in-law in old Hindi films? The wicked one was invariably played by Lalita Pawar and the goody goody suffering one by Nirupa Roy!!

Themi Tindoroo:  Have you noticed the moms-in-law in the TV serials lately? They are getting younger and younger and sexier too!!  Forget yummy-mummies, it is the mom-in-law that rules!! However in some serials, they are wickedness personified and in most saas-bahu sagas, either the saas wants to kill, knife, gun-down or poison the Bahu, or the Bahu wants to bump off the old lady. Ridiculous yaar!

Sammy- Six- Pack:  And yet, some Parsi women watch these brain-damaging serials for hours without any other kaam-dhandha. Even my wife, Mahrukh watches them from morning till night and from Mahrukh-Mailu, she’s become Mahrukh the moron. It has definitely damaged her brain.  She even talks in TV language to me, saying, “Aarey O! Tunnu-Munnu ke bapu, zara idhar toh aiyey!! Aji suntey ho!!”

Vikaji Vaaghmaroo:   Throw away your TV or better still throw away your wife! Everyone laughed and with the last farcha demolished, there was no more farcha-pe-charcha!

What does “mailu” mean?