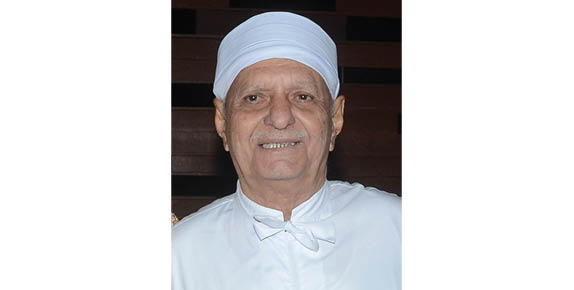 On 5th November, 2017, the Community lost one of our most loved and cherished priests, Iranshah Yozdaathregar Mobed Palanji Dastoor, in a tragic train accident. Hailing from Tarapore and residing in Udvada, Mobed Palanji trained at the Dadar Athornan Institute and served as the Panthaki of the Bandra Agiary and the Panthaki of the JD Colaba Agiary for thirty-seven years. He was very well-known for his extremely helpful nature and this became all too apparent on seeing the huge crowd that had gathered at the Doongerwadi to pay their last respects. In fact, in a unique gesture, the final prayers for Mobed Palanji Dastoor were carried out simultaneously at Doongerwadi as well as at Iranshah in Udvada. He will be sorely missed and is survived by his daughter Maharukh (and husband Khushroo), his son Kurush (and wife Meher), and grandsons Farzaad and Yohan, his sister Dhun (and Dinshahji), his brother Ervad Soli Dastur, the whole Dastoor family, the nine Iranshah families and all in the Community whose lives he touched and whose hearts he will always live in.

PALANJI PIROJSHA DASTOOR, a senior member of the Udvada Nine Families, was a dedicated and selfless Yozdathregar mobed having served ‘Pak Iranshah’ throughout his lifetime. Endeared by all, he was fondly called as ‘Palanji kaka’ by everyone in Udvada, including myself.

It was my good fortune to undergo brashnum(nahn) together many a times in Udvada where I had the pleasure of discussing many topics related to the history of Udvada and our sacred rituals at ‘Iranshah’ carried down by our dear forefathers – valuable snippets indeed.

He was one of the valued mobeds of Iranshah, instrumental in initiating many young Ostas of our Nav Kutumb into priesthood as Navars, Maratab and also in their stage of performing the first Boi ceremony of our revered ‘Iranshah’. He was the guiding force and well-wisher for our young and old mobeds alike, and treated all with the same kindness and love.

One of his famous lines that he would often repeat was, “apune behest ni khusali bhi nahi, ne dojak ni dalgeeri bhi nahi” (meaning, we take life as it comes, neither awaiting heavenly bliss nor fearing hell’s terror).

Palanji kaka, you will be sorely missed by one and all whose lives you have touched in a meaningful way!

May his soul rest in Garothmaan Behest!